Molecular Identification of Coccidioides posadasii in Synovial Fluid in Korea

Coccidioidomycosis is a fungal infection caused by the species. It is a common disease, endemic to the southwestern United States, and regions of Central and South America. Infection is generally caused by inhalation of spores [1]. Symptoms of coccidioidomycosis range from asymptomatic to life-threatening pulmonary or disseminated disease, involving the central nervous system, bones, joints, and skin. Diagnosis should be confirmed by serological tests, culture or histopathological examination [2]. In Korea, coccidioidomycosis was first reported in 1976. Its incidence has continuously increased since the last 20 years, with 17 cases reported so far. However, these cases were confirmed by histopathological examination or culture with microscopic identification [3]. Here, we present the first case of disseminated coccidioidomycosis involving the knee joint, confirmed by molecular identification of infection. This study was approved by the Institutional Review Board of Boramae Medical Center (IRB No. 20200407/30-2020-40/043).

An 80-year-old Korean man with a medical history of early gastric cancer and subtotal gastrectomy in 1993 visited the outpatient department of Boramae Medical Center from 2012 to 2018. He complained of chronic cough, recurrent pneumonia, and left knee pain and swelling. No evidence of mycosis was detected during the six-year outpatient visits. In June 2018, he opted to have total knee replacement surgery and underwent a preoperative evaluation. Chest radiographs and computed tomography images revealed multiple solid and cavitary nodules of variable size in both lungs. We suspected, that he had either pulmonary metastasis of a malignant tumor or a mycobacterial infection. At the time, he refused further diagnosis and treatment. Subsequently, in November 2019, he reported increased sputum production and aggravated dyspnea. A complete blood count (CBC) test indicated mild eosinophilia (592/μL) with normal leukocyte count (8,710/μL). A transbronchoscopic lung biopsy and pathological examination revealed granulomatous inflammation and necrosis of bronchial tissue, indicative of coccidioidomycosis. Both Gomori Methenamine Silver and periodic acid-Schiff staining of bronchial tissue were positive, while acid-fast bacillus staining was negative. However, no organism growth was detected in the culture of bronchial washings. Meanwhile, the patient complained of severe arthralgia of the left knee, and therefore underwent an ultrasound-guided joint fluid aspiration for diagnosis. The fluid had a yellow jelly-like consistency with debris. After 3 weeks of incubation on Sabouraud dextrose agar at 30°C, there was white cottony mold on the plate, that grew into white fluffy circles (Fig. 1A). Microscopic examination revealed branched hyphae with alternating barrel-shaped arthroconidia that suggested species (Fig. 1B). The genus is classified into two species according to their geographical distribution: primarily occurs in the Central Valley of California in the US, while primarily occurs outside California. However, the two species are morphologically identical with similar phenotypes and pathogenicity. They are therefore, difficult to distinguish using morphological and serological methods. However, molecular identification techniques can overcome this limitation [4]. 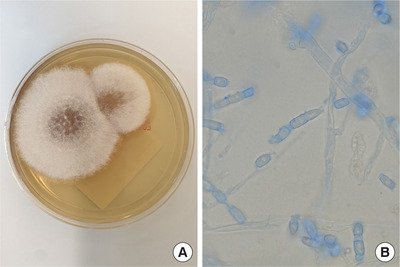 Figure 1. Microbiological findings in culture of synovial fluid: (A) Colony of white cottony mold on Sabouraud dextrose agar after 3 weeks at 30°C, (B) Arthroconidia of (lactophenol cotton blue stain, 1,000× magnification).

We extracted the DNA from the isolated colony by boiling at 100°C for 10 min. PCR amplification and sequencing of the internal transcribed spacer (ITS) region was then conducted using the ITS1 (5′-TCCGTAGGTGAACCTGCGG-3′) and ITS4 (5′-TCCTCCGCTTATTGATATGC-3′) primers. We thus obtained a 628 bp consensus sequence (GenBank accession number MH862946.1) which was found to share 100% similarity with strain CBS 113847, using the Basic Local Alignment Search Tool program of the NCBI database. Further, the patient was suspected to have coccidioidomycosis involving the adrenal glands, but refused adrenal biopsy. The patient’s serum sample was sent to the Mayo Clinic Laboratory (Rochester, MN, USA) for serological testing. Results were negative for IgM antibodies but positive for IgG antibodies, as determined by the immunodiffusion method. In addition, the antibody titer was 1:256, as determined by the complement fixation method. These results suggested that he had a chronic coccidioidal infection.

Although coccidioidomycosis is common in America, it is rarely recognized or diagnosed in non-endemic regions [5]. In our case, it was only after his diagnosis, that the patient informed us of having visited Phoenix, Arizona, USA several times from 2010 to 2012. This lack of information delayed accurate diagnosis. Therefore, while taking patients’ medical history it is necessary to include travel history, to facilitate accurate diagnosis. In addition, pneumonia of unknown etiology should be eliminated as a possible cause of coccidioidomycosis, which accounts for 30% of cases of community-acquired pneumonia in endemic regions [6]. Since it was first reported in 1976 in Korea, 17 previous cases of coccidioidomycosis, have been confirmed by histopathology or culture with microscopic identification [3]. Of these, 8 were of disseminated coccidioidomycosis (Table 1). Including our case, this number accounts for half of the total cases. Most cases (87.5%) involved the skin, while only our case involved the joint. Further, a review of coccidioidomycosis in China, has reported 30 total cases, of which 12 (40%) were that of disseminated infection [7]. Although extrapulmonary involvement of coccidioidomycosis accounts for less than 1% of total infections [8], disseminated infection is more common in Asian patients than in patients from endemic regions [7, 8]. It is also more common in men, pregnant women, infants, non-Caucasians, and immunocompromised individuals [6]. In Korea, 66.7% cases of disseminated infection were male and 55.6% (including our case) were immunosuppressed patients (Table 1).

Our patient showed chronic pulmonary pneumonia and disseminated infection. As it happened in our case, pulmonary coccidioidomycosis is often mistaken for pulmonary malignancies due to morphological similarities. It presents as a nodular or cavitary lesion, cavitary pulmonary disease with fibrosis, or military pulmonary dissemination [9]. Therefore, laboratory confirmation by histological or microbiological testing is important. Although, culture is the gold standard in diagnosis, it is slow [10]. Moreover, since Korea is a non-endemic region, the serological test that is commonly used in America, is not easily available here. Therefore, in addition to the serologic test, we analyzed the synovial fluid by culture, followed by ITS sequencing of the fungal isolate. Disseminated infection requires lifelong treatment with anti-fungal agents. The Infectious Diseases Society of America (IDSA) recommends fluconazole or itraconazole for chronic pneumonia, azole therapy for bone and joint coccidioidomycosis, and amphotericin B as initial therapy in severe cases [11]. In our case, we started with fluconazole, but later changed to amphotericin B after diagnosis of joint infection. Further, spp. are known to cause laboratory-acquired infections. The organism is highly infectious; just one spore can cause an infection. Therefore, clinical specimens should be handled and processed in Class II biological safety cabinets according to Biosafety Level II procedures. An unknown mold should be cultured inside a class II biological safety cabinet [11]. The Korea Centers for Disease Control and Prevention has classified spp. as a high-risk pathogen and requires notification of its isolation and transfer [12].

In summary, we identified in synovial fluid from the knee joint of a patient. Although coccidioidomycosis is rarely known in Korea, its incidence is rapidly increasing owing to globalization. Therefore, clinicians and clinical pathologists need to be aware of the disease. Molecular identification techniques can be used for accurate diagnosis of spp. infection, especially in non-endemic regions.