IgD, one of the immunoglobulin isotypes, was rst discovered in patients with multiple myeloma in 1965 [1]. IgD accounts for <1% of the total serum immunoglobulin, and its clinical significance has not been completely established [2]. Serum IgD concentration can be increased in some clinical situations, such as IgD monoclonal gammopathy, hyper-IgD syndrome, and autoimmune disease [3, 4]. IgD multiple myeloma accounts for approximately 2% of multiple myeloma cases. Although IgD multiple myeloma is rare, early diagnosis is important because of its association with young age and advanced stage at the time of diagnosis [5]. Particularly, IgD monoclonal peak is small or undetectable on electrophoresis, which emphasizes the importance of IgD quantification for diagnosis and disease monitoring [6].

Serum IgD concentration shows a wide variation between normal individuals [7, 8]. Previous studies have reported that several factors, such as age, sex, and smoking habit, can affect IgD concentration [9-11], although these findings are controversial [12, 13].

Herein, we evaluated the analytical performance of the SPAPLUS (The Binding Site, Birmingham, UK) for IgD quantification and established a reference interval for IgD in the Korean population.

Two control materials and one pooled serum were used for precision assessment. The estimated concentrations of control materials provided by the manufacturer were 23.1 mg/L and 97.7 mg/L. They were measured in duplicate per run, and two runs per day for 20 days. Repeatability and within-laboratory precision were evaluated according to the Clinical and Laboratory Standards Institute (CLSI) EP05-A3 guideline 14].

Linearity was assessed according to the CLSI EP06-A guideline [15] using the SPAPLUS calibrator, which consist of pooled human serum. The highest and lowest calibrators (0.6 mg/L and 20.8 mg/L, respectively) were mixed at ratios of 5:0, 4:1, 3:2, 2:3, 1:4, and 0:5. Each of the six concentrations was measured in duplicate. From these results, regression analysis was performed for the rst-, second-, and third-order polynomials, and the coef cient of determination (2) was calculated.

Comparison with the BNII system was performed according to the CLSI EP09-A3 guideline [16]. A total of 36 leftover patient samples evenly distributed at the analytical measurement range were included: 20 were within the reference interval claimed by the manufacturer, and 16 were outside the reference interval claimed by the manufacturer. The Wilcoxon signed-rank test, Passing-Bablok regression analysis, and Bland-Altman analysis were performed using MedCalc for Windows version 15.0 (MedCalc Software, Ostend, Belgium).

Table 1 . Precision of the SPAPLUS in serum IgD quantification

In the regression analysis, the rst-order equation was the best- tting line. Linearity was observed within the tested concentration range (0.6–20.8 mg/L) with a coef cient of determination (2) of 0.9996 (Fig. 1). 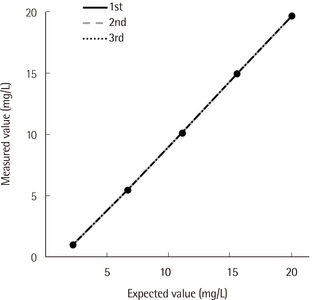 Figure 1. Linearity of the SPAPLUS in serum IgD quantification. Linearity was observed within the tested concentration range (0.6–20.8 mg/L) with a coefficient of determination (2) of 0.9996. 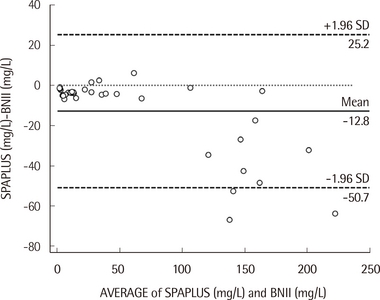 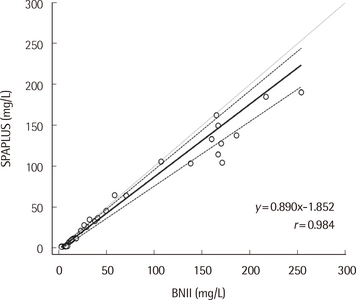 Table 2 . Characteristics of the 120 healthy individuals 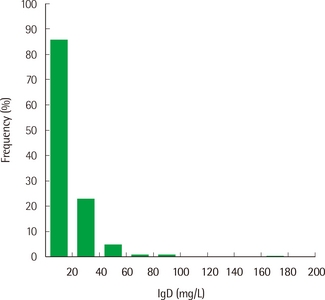 IgD is considered a relatively non-significant immunoglobulin isotype. Although previous studies have revealed that IgD is related to several clinical situations, such as IgD monoclonal gammopathy, hyper-IgD syndrome, and autoimmune disease, the clinical signi cance of IgD is still unknown [2]. However, IgD quantification is important in the diagnosis and monitoring of IgD monoclonal gammopathy [6]. Therefore, we evaluated the analytical performance of the SPAPLUS turbidimetric analyzer for IgD quantification.

Ethnicity was another possible factor causing a difference in reference intervals. The reference intervals claimed by the manufacturer (reagents LK013.S and LK013.T) were based on the US and UK populations, respectively. In contrast, this study was conducted in the Korean population. Although a previous study of Gerrard et al. showed different IgD concentrations in different ethnic populations [18], there have been few studies that have addressed the association of IgD concentration and ethnicity. Further studies are needed to establish an association between IgD concentration and ethnicity.

In conclusion, the SPAPLUS turbidimetric analyzer shows good analytical performance for IgD quantification. At a high concentration, results from the SPAPLUS and BNII showed a significant difference. In addition, because the reference interval for IgD can be affected by several factors, it is recommended to consider these factors when establishing a reference interval.