Urine analysis is one of the most commonly performed tests in clinical laboratories. Urine sediment analysis determines the presence and quantity of various urine particles, such as red blood cells (RBC), white blood cells (WBC), epithelial cells (EPI), bacteria, and fungus, among others [1]. This is helpful for the diagnosis and treatment of kidney and urinary system diseases [2] and provides clinicians with essential information on renal diseases [3, 4]. Although the manual standardized microscopic sediment test has been acknowledged as a reference method [5, 6], it is time consuming, labor intensive, and shows poor reproducibility due to the interpretation proficiency of technicians [7-9]. For this reason, automated urine sediment analyzers have begun to emerge to overcome longstanding issues [4, 10-12], and they have now become a necessity in tertiary hospitals, in Korea.

We collected leftover patient urine samples from outpatient clinics in our hospital. A total of 232 patient samples were used. After completing the requested tests from the outpatient clinics, each sample leftover was given a new code and was divided into four tubes for the analyses. The volume of each individual urine sample required for this study was 16 mL, 10 mL of which were used for manual microscopy, and the remaining 6 mL were divided into 2 mL samples for each analyzer. All specimens were processed within 2 hours from receipt in our laboratory. This study was approved by the institutional review board of Kosin University Gospel Hospital and informed consent was exempted (KUGH 2015-06-107-001). If the volume of sample was too low to perform all experiments, we set a priority for WBC and RBC testing in this study.

A senior technician manually counted the number of RBCs, WBCs, and EPIs. A total volume of 10 mL of urine sample was centrifuged at 400×g for 5 minutes and 9 mL of supernatant were removed. The remaining sample was resuspended, and a drop of sample was placed on a slide. An 18×18 mm cover slip was applied. RBCs, WBCs, and EPIs were counted 10 to 20 times using a 400×magnification in a microscope and the mean value of each sediment was recorded. Eight concentrations of RBCs, WBCs, and EPIs were recorded: 0-1/high-power field (HPF), 2-4/HPF, 5-10/HPF, 11-15/HPF, 16-20/HPF, 21-30/HPF, 31-40/HPF, and higher than 40/HPF. The technician was blinded to the test results of any automated analyzers. The results of the manual microscopic examination were considered correct and were compared with those of the automated urine sediment analyzers.

UF-1000i is based on an automated flow cytometry system [17]. When a urine sample is introduced into the analyzer, it automatically adds stain to visualize the cellular structures of the particles. A laser beam is used for identifying each particle using forward scattered light, side scattered light, and fluorescence signals. UF-1000i converts electrical signals to scatter grams and histograms, with particles being classified to parameters such as counts of RBC, WBC, bacteria, EPI, and casts [15, 18]. The results are reported in μL and transformed into counts per HPF by multiplying a converting factor (5.5) [19]. We used three parameters: RBC count, WBC count, and EPI count.

Cobas u701 is an image-based analyzer. Digital images are obtained and evaluated using Auto Evaluation Module (AIEM) processing software after samples are transferred to a cuvette and centrifuged [20, 21]. Particles are classified as RBC, WBC, EPI, bacteria, hyaline casts, crystals, yeasts, sperm, and mucus. The results are reported in quantitative and semi-quantitative forms. RBC and WBC counts from Cobas u701 were set to recalculate particles in the images to achieve particle number per HPF [22]. The instrument was operated, and reagents were used according to the manufacturer’s instructions.

Inside the IRIS Iq200, laminar flow is created toward the lens of a charged coupled device (CCD) camera. It uses captured images from the CCD camera and an algorithm of automated particle recognition (APR) which distinguishes particles by size, shape, texture, and contrast. Particles were automatically sorted into 12 categories including RBC, WBC, white cell clumps, EPI (squamous and non-squamous), hyaline casts, bacteria, crystals, yeast, unclassified casts, sperm, and mucus [23]. Cell counts per HPF were automatically calculated in the instrument and reported [15, 24]. The manufacturer’s instructions of the analyzer and reagent were followed. All results from the automated analyzers were provided both in counts/HPF and counts/μL.

Analyses of precision of the three automated sediment analyzers were performed only for RBC and WBC. To calculate the precision, we used the protocols from Clinical and Laboratory Standards Institute (CLSI) EP05-2A [25]. For the consistency of the test results, we used urine particle quality control (QC) materials. QC materials containing WBCs and RBCs at two concentrations (low and high) were used for two analyzers: UF II control (Sysmex Diagnostic) for UF 1000i and Bio-Rad qUAntify (Bio-Rad, Hercules, CA, USA) for Cobas u701. In IRIS Iq200, iQ Body Fluids Controls (Iris Diagnostics, Chatsworth, USA) were used as QC materials. These controls consisted of two concentrations (low and high), and the results were presented as particles/μL. The tests were performed twice per run, two runs per day, for 20 days to calculate repeatability and within-laboratory precision.

To analyze linearity, we used the protocol from CLSI EP06-A [26]. We prepared two sets of five samples with equally spaced concentrations for the WBC and RBC experiments, respectively. The high concentration samples (RBC, 1,306/μL, WBC 110/μL for Iris; RBC, 325/μL, WBC, 195/μL for Cobas; RBC, 5,174/μL, WBC 5,313/μL for UF) and low concentration samples (the supernatant of centrifuged normal urine) were used. The high and low concentrations of urines were mixed proportionally at 0:4, 1:3, 2:2, 3:1, and 4:0. We randomly measured the concentration of samples twice. The results were interpreted using both the flowchart of EP06-A, which is based on polynomial evaluation, and using a linear regression graph with the correlation coefficient (R2).

For precision, the linearity test using flow chart of CLSI EP06-A [26] was analyzed using Analyze-it version 5.11 (Analyze-it Software Ltd., Leeds, UK). This software can evaluate polynomial methods for linearity by automatically analyzing polynomial regression for different order polynomials, finding the best fit regression model, and showing allowable nonlinearity. Passing-Bablok regression and Bland-Altman analysis were also analyzed using Analyze-it. The remaining statistical analyses were performed using SPSS v.25 (IBM Corp., Armonk, NY, USA). Kolmogorov-Smirnov test was performed to determine the normality of the results, and all results were confirmed to have normal distributions. Spearmen’s correlation was used for the correlation between methods and weighted kappa was used for the agreements. Kappa values were interpreted as follows: 0.00-0.20 for slight agreement; 0.21-0.40 for fair agreement; 0.41-0.60 for moderate agreement; 0.61-0.80 for substantial agreement; and 0.81-1.00 for almost perfect agreement [28]. The differences were considered statistically significant at a <0.05. Microsoft Excel (Microsoft Corporation, Redmond, WA, USA) was also used to draw the carry-over and linear regression graphs.

The repeatability and within-laboratory precision of UF-1000i and Cobas u701 for RBC and WBC are shown in Table 1. The repeatability of the low concentration material of RBC and WBC counts in Cobas u701 are not presented because the mean values were calculated using negative control material, which is near zero. The CVs in samples of low and high concentration materials ranged from 5.1% to 6.6% and from 1.9% to 11.9%, respectively. 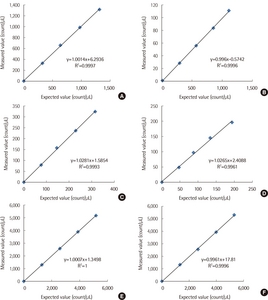 Table 2 . Passing-Bablok, Bland-Altman, and Spearman’s correlation coefficient for WBC, RBC, and EPI of the three automated analyzers and manual microscopy

Table 3 . Concordance rate (%) and agreement within one grade difference between three automated analyzers and manual microscopy for RBC, WBC, and EPI

Linearity was estimated in RBC, WBC, and EPI. All three analyzers showed satisfactory linearity in each sediment (Fig. 1, all R2 >0.99). Carry-over was negligible in RBC and WBC for all three analyzers (less than 1%). Linearity and carry-over were also considered acceptable in previous studies [15, 23].

In Bland-Altman analysis, IRIS Iq200 and Cobas u701 showed a lower cell count tendency than manual microscopy and the difference was lower than 1 cell/HPF. This was described in other studies as well [15, 22, 24, 32]. On the other hand, more cells were counted using UF-1000i than using manual microscopy in our study. This was also described in previous studies [13, 33]. For the UF series, a tendency toward false positives regarding RBC and WBC because of misclassification has been reported [14, 33, 34]. This false-positive tendency has also been reported for EPI [14, 35].

Several factors have been reported as error-causing components of the counting process. Incomplete centrifugation and counting variation among technicians can occur, even if processes are followed to standardized methods [1]. Sometimes, some cells can be missed in manual microscopy because of focus adjustment out of the field of view [15]. In our studies, there were occasions where ghost cells were not identified, fungus and yeast were misclassified as RBCs, and some RBC casts were misclassified as crystals or WBCs. In such cases, the discrepancies between automated analyzers and manual microscopy should be examined by technicians using manual microscopy, including pre-analytical and analytical error sources [36].

The strength of agreement analyzed using kappa statistics was relatively lower than that of the concordance rate between the methods. This situation was observed in previous studies as well [15, 16]. We agree that it was caused by the way concordance was assigned. When we calculated the concordance rate between the methods, concordance within one grade of difference was considered to be concordant. On the other hand, one grade difference counts were not considered as concordant in the agreement analysis using kappa statistics and were significantly abundant to contribute to the relatively lower agreement in our study.

Although the Cobas u701 was considered to be the closest to manual microscopy due to its slide making process, the agreement for RBC, WBC, and EPI was not significantly superior to that of other analyzers. Each analyzer has its own merits in the clinical laboratory. The Cobas u701 and UF-1000i store all images so that revision can be easily accomplished by rechecking the particle images without subsequent manual microscopy [13, 15]. Technicians need to be well trained to identify the images presented in IRIS Iq200 [23]. UF-1000i offers a scatter gram which is especially useful for RBC morphology [13], which might explain its relative superiority to other analyzers in RBC identification and, by means of machine learning technology, manual microscopic review rate has been reduced by more than before [39].

In this study, several limitations were noted. Cell counting in manual microscopy usually has been performed by two technicians to ensure proficiency; however, only one technician was involved in our study, limiting our interpretation accuracy. Since manual microscopy presented results as semi-quantitative values, we needed to reassign each value to the actual quantitative values for analysis, which may have caused some bias. Although other sediments such as bacteria, yeast, cast, crystal, sperm, and mucus were present, our study focused on RBC, WBC, and EPI. Therefore, our study is of limited value in comparing the full performance of each analyzer.