Flow cytometry is being used increasingly in clinical hematology to establish diagnosis, prognostic classification, and evaluation of treatment effectiveness of hematologic neoplasms. However, flow cytometry is highly dependent on expertise, and is diffificult to standardize [1]. For development and standardization of flow cytometry, the EuroFlow Consortium was formed in 2005, and the EuroFlow project was initiated in 2006 [1]. Currently Cytognos, Inc. (Salamanca, Spain) provides several EuroFlow products, such as multiple myeloma (MM) minimal residual disease (MRD) kits, lymphoid screening tube (LST), acute leukemia orientation tube (ALOT), and plasma cell screening tube (PCST) kits [2]. The PCST kit is a pre-mixed combination of 8 conjugated antibodies designed for identification and quantitation of plasma cells. Additionally, it can also discriminate between normal polyclonal plasma cells versus aberrant monoclonal plasma cells [2]. As there are no prior reports in the literature regarding the PCST kit designed by Cytognos used with the EuroFlow panel, herein we have described our experience with the PCST kit, comparing it to a conventional 4-color, 2-tube method for analysis of plasma cell dyscrasias.

In total, 40 patients were tested in this study from December 2017 to June 2019, of which 33 were newly diagnosed with MM and the remaining 7 were in the reactive state. Diagnosis of MM was based on the International Myeloma Working Group (IMWG) criteria. Reactive plasmacytosis was defined as a level of bone marrow (BM) plasma cells >3.0%, without any evidence of a plasma cell disorder. Thirty-nine BM samples and one peripheral blood (PB) sample were analyzed. Five hundred cells in BM aspirate smears and two hundred cells in PB smears were counted for differentials. This study was approved by the Institutional Review Board of Soonchunhyang University Hospital, Seoul (IRB 2018-01-001). Conventional 4-color, 2-tube analysis was performed using monoclonal antibodies against CD56, CD19, CD138, and CD45 for surface staining, and using kappa, and lambda monoclonal antibodies for cytoplasmic staining [3]. White blood cell counts were adjusted to 3×106/mL. For the surface staining tube, 100 μL of the washed specimens was incubated with 10 μL of each of the monoclonal antibodies for 20 minuts at room temperature in the dark. Four monoclonal antibodies were used for flow cytometric immunophenotyping: fluorescein isothiocyanate (FITC)-conjugated anti-CD56; phycoerythrin (PE)-conjugated anti-CD19; PE-cyanine 5.1 (PECy5)-conjugated anti-CD138; and PE-Cyanine 7 (PECy7)-conjugated anti-CD45 (Beckman Coulter, Miami, FL, USA). VersaLyse lysing solution (Beckman Coulter) was added to the tube, vortexed immediately for 10 sec, and then incubated for 10 min at room temperature in the dark. For cytoplasmic staining tube, 50 μL of the washed samples was stained with PECy5-anti-CD138 and PECy7-anti-CD45, and then incubated for 20 minutes at room temperature in the dark. Thereafter, an IntraPrep procedure was performed. Then, FITC-anti-kappa and PE-anti-lambda (Beckman Coulter) were added and incubated for 20 minutes at room temperature in the dark. Acquisition of 250,000 nucleated cells was performed using a BC Navios flow cytometer (Beckman Coulter), and subsequent analyses were performed using Kaluza (v.1.3, Beckman Coulter). Plasma cells were initially identified using CD138 and side scatter, and CD138+ gated cells were analyzed for CD56, CD19, CD45, and cytoplasmic kappa and lambda (Fig. 1A). 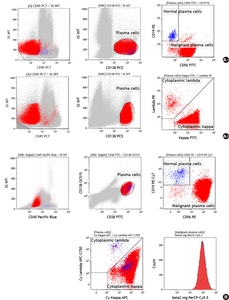 Figure 1. Representative example of flow cytometric immunophenotyping using two methods to distinguish between neoplastic plasma cells and reactive plasma cells in a patient with multiple myeloma. (A) Conventional 4-color, 2 tube method. Plasma cells were gated with CD138+ and low side scatter, and were distinguished as neoplastic cells (CD56+/CD19-/CD138+/CD45-) and reactive plasma cells (CD56-/CD19+/CD138+/CD45+) in a first tube (A-1). Cytoplasmic light-chain restriction was analyzed in a second tube (A-2). (B) Plasma Cell Separation Tube (PCST) method. Plasma cells were gated for CD38+ and CD138+ and analyzed for CD56, CD19, CD45, cytoplasmic kappa, cytoplasmic lambda, and β2-microglobulin in one tube.

In the PCST method, the Beckman Coulter Navios flow cytometer setup and fluorescence compensation settings were performed according to the manufacturer’s instructions [4]. Fluorochrome-conjugated antibodies for surface staining were Pacific Blue-conjugated anti-CD45, PECy7-conjugated anti-CD19, OC515-conjugated anti-CD138, FITC-conjugated anti-CD38, PE-conjugated anti-CD56, and PerCPCy5.5-conjugated anti-β2-microglobulin (Cytognos). Fluorochrome-conjugated antibodies for cytoplasmic staining were APC-conjugated anti-kappa, and APC-C750-conjugated anti-lambda (Cytognos). Both are present in the pre-mixed antibody cocktail in the PCST kit. 50 μL of the sample and 30 μL of the surface staining reagent were added to each tube, and PBS with 1.0% bovine serum albumin was added to a final volume of 100 μL per tube. Incubation for 30 minutes was conducted at room temperature in the dark. After washing, Reagent A (fixative solution; Nordic-MUbio BV, Susteren, Netherlands) was added and incubated for 15 minutes, washed with PBS, then reagent B (permeabilizing solution; Nordic-MUbio) was added. Next, 10 μL of the pre-mixed vial intracellular antibodies was added and incubated for 15 minutes. After washing with PBS, data acquisition for 150,000 nucleated cells was performed using the Navios flow cytometer; subsequent analyses were performed using Kaluza. Plasma cells were initially identified using CD38 and CD138, following which, CD38+, CD138+ gated cells were analyzed for CD56, CD19, CD45, cytoplasmic kappa, cytoplasmic lambda, and β2-microglobulin (Fig. 1B). Data were entered into SPSS v.22 (SPSS Inc., Chicago, IL, USA) and analyzed. To determine the correlation of each method, generalized estimating equation (GEE) and the Spearman’s rank correlation tests were performed. 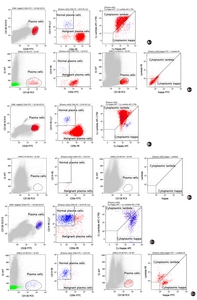 Among our 33 MM cases, there was only one patient in which light-chain restriction could be confirmed by the PCST method, but not by the conventional method. It could be assumed that this difference between the two methods arose due to the differing composition of assay reagents and the testing procedures involved. This could represent an example of the importance of using validated reagents and kits. Percentages of plasma cells determined by both methods were significantly lower than those determined by manual differential counts. The lower percentage of plasma cells determined by flow cytometry compared to morphology may be due to the provision of a blood-diluted sample, or a sample of liquid BM [5, 6]. MFI values of β2-microglobulin were not correlated with β2-microglobulin concentrations determined by radioimmunoassay. β2-microglobulin levels identified by flow cytometry reflect the amount of β2-microglobulin on the cell surface. Further study will be needed to determine how the amount of β2-microglubulin on the cell surface is related to patient prognosis in MM.

There have been many studies regarding the identification and characterization of plasma cells by flow cytometry [7-13]. In 2008, the European Myeloma Network (EMN) reported reaching a consensus involving multiparametric flow cytometry in MM and related disorders. The minimal test antigens for classification of abnormal plasma cells are CD19 and CD56. Assessment of cytoplasmic κ/λ expression by flow cytometry is important to demonstrate clonality at presentation [14]. The Cytognos PCST kit contains antibodies against essential markers such as CD19, CD56, Igκ, and Igλ. The major advantage of this PCST kit is the use of multiple colors in one tube, and thus, it can recognize multiple antigens simultaneously. For example, when abnormal plasma cells are mixed with normal plasma cells and analyzed using the PCST kit, cytoplasmic light-chain restriction can be analyzed only in abnormal plasma cells [2]. The PCST kit contains premixed reagent combinations with 8 conjugated antibodies, with instructions regarding the device, and compensation settings. Therefore, a variety of laboratories use it for convenience and with ease. The PCST kit can be used to test PB samples, as well as BM samples [2]. Among 40 samples in our study, there was one PB sample from a patient who was diagnosed with plasma cell leukemia. Although only this single case was tested using a PB sample, there were no differences in the MFI of the target population cells compared to the results for other BM samples. The presence of clonal circulating plasma cells is an indicator of high risk of disease development in newly diagnosed MM patients [15, 16]. Therefore, prognostic evaluation of MM patients, when needed, as well as diagnosis of plasma cell leukemia, can be undertaken using PCST.

Multi-color analysis in a single tube is a powerful advantage of the PCST method for gating neoplastic plasma cells and for analyzing their properties. Accelerated acquisition times and standardized compensation parameters may shorten total test times. Additionally, standardized protocols and approaches may overcome the variability inherent in flow cytometric assays conducted by different laboratories. PCST exhibited superior performance in detection of monoclonal plasma cells than that by the conventional method. Therefore, PCST is suitable for immunophenotypic screening of plasma cell dyscrasias, and may improve laboratory efficiency and quality.

The authors thank Mr. Hyung Yeol Choi, ANSE Inc., for his technical assistance for this study.