Clinical Use of Procalcitonin in the Diagnosis of Sepsis: Evaluation of PCT–qSOFA

The definition of sepsis has recently changed to include sequential organ failure assessment (SOFA) and quick SOFA (qSOFA) criteria, with an emphasis on organ failure [1, 2]. The SOFA grade requires a complete assessment of numerous laboratory variables (a ratio of arterial oxygen partial pressure to fractional inspired oxygen platelets, bilirubin, mean arterial pressure, creatinine/urine output) and the Glasgow coma scale score. In contrast, qSOFA only requires three clinical criteria (respiratory rate, altered mentation, and systolic blood pressure) and can be applied as a rapid bedside screening tool. However, systemic inflammatory response syndrome (SIRS) remains an essential component in the diagnosis of sepsis [3], and the measurement of biomarkers to detect exacerbations in inflammatory conditions could be helpful. Procalcitonin (PCT) is known to exhibit the highest accuracy among the many biomarkers of sepsis [4]. In this study, we evaluated the diagnostic performance of PCT and qSOFA in combination, namely PCT–qSOFA, to propose a simpler and more accurate method of diagnosing sepsis.

Subjects who ordered more than two consecutive requests for blood culture (BC), owing to a suspicion of sepsis, and PCT at the same time between May 2016 and April 2017 were included in this study. Bloodstream infections due to spp., , and were included. The exclusion criteria were age <18 years, duplicate cases, and inadequate data for calculating SIRS or qSOFA scores.

The study population consisted of 102 patients with laboratory-confirmed primary bloodstream infection [5] and 102 patients with repeated negative BC results. The criteria for laboratory-confirmed primary bloodstream infection were that the patient must have a recognized pathogen in one or more BCs and the organism cultured from the blood should not be related to an infection at another site. The recognized pathogens included , spp., , spp., spp., spp., and others.

The 204 patients were subdivided into four groups on the basis of BC results and SIRS scores (≥2/4): the bacterial sepsis group (group 1, N=67), BC-negative sepsis group (group 2, N=37), BC-positive group without corresponding clinical symptoms or signs of sepsis (group 3, N=35), and the control group without evidence of sepsis (group 4, N=65). The main interest of this study was to determine whether patients outside the intensive care unit (ICU) as well as in the ICU can benefit from PCT and qSOFA assessment. Therefore, qSOFA scores were also divided into four groups, including and excluding patients in the ICU (N=23), in all the analyses.

This study was approved by the Institutional Review Board of National Health Insurance Service Ilsan Hospital (NHIMC 2018-05-014).

The total study population was subdivided into four groups based on BC results and SIRS scores. SIRS was scored for the day blood cultures were ordered by retrospectively reviewing electronic medical records. The criteria for SIRS were the presence of two or more of the following: temperature >38°C or <36°C, heart rate >90 beats/min, respiratory rate >20 breaths/min or a ratio of arterial oxygen partial pressure to fractional inspired oxygen <32 mmHg, white blood cell count >12,000/mm3 or <4,000/mm3, and immature bands >10% [6]. The criteria for qSOFA were respiratory rate ≥22 breaths/min, altered mentation (Glasgow coma scale score <15), and systolic blood pressure ≤100 mmHg [1]. We also obtained data such as age, sex, acquisition type, ICU admission, emergency room admission, diagnosis, previous antimicrobial use in the last seven days, prognosis, microbiology culture results, white blood cell count, mental status, Glasgow coma scale score, and vital signs. Mental status was categorized into three groups: alert, nearly alert–very drowsy, and stupor–coma. The mental status of “alert” was assigned when a patient could follow commands in a timely fashion. Stuporous patients required vigorous stimulation, and comatose patients could not respond appropriately to verbal nor painful stimuli. All the other patients were categorized into the nearly alert–very drowsy group.

The Youden index, a summary of the receiver operating characteristic (ROC) curve analysis, was estimated to evaluate the diagnostic performance with logistic regression and area under the ROC (AUROC) curves. We used logistic regression analysis with the presence of sepsis as the binary dependent variable and PCT levels and qSOFA scores as predictor variables to calculate the predicted probability value of the combination of the two markers. This predicted probability value was also used to calculate the AUROC value for the combination of the two markers. Differences between the AUROCs were compared using the Delong method.

Post -test probability and post-test odds were analyzed to determine whether PCT–qSOFA improves the diagnostic value [7]. We included group 3 in the sepsis group (groups 1, 2, and 3) in the post -test probability analysis. Group 3 corresponded to bloodstream infection according to the CDC standard [5], and sepsis could not be completely excluded even though the criteria for SIRS were not met. Not all patients with SIRS are septic, and there are subgroups of hospitalized patients, particularly at extremes of age, who do not meet the criteria for SIRS on presentation but who progress to multiple organ dysfunction [8].

1. Characteristics of the study population

Table 1 . Demographic and clinical characteristics of the subjects

2. Comparisons of PCT and qSOFA scores in the four groups 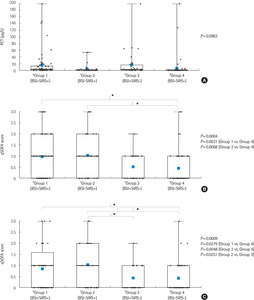 3. Diagnostic performance of PCT and qSOFA

We applied various PCT cutoff values to identify a better AUROC. In the ROC analysis, the AUROC of PCT (cutoff of >2.47 μg/L), qSOFA (cutoff of ≥1), and qSOFA (cutoff of ≥2) excluding patients in the ICU was 0.701, 0.628, and 0.610, respectively (Fig. 2). The AUROCs of PCT (cutoff of >0.18 μg/L) and qSOFA (cutoff of ≥1) of patients in the ICU were 0.765 and 0.725, respectively. The combination of PCT and qSOFA showed improved diagnostic performance when compared with the qSOFA score alone. The AUROC of PCT–qSOFA was 0.718 (all subjects), 0.714 (excluding subjects in the ICU, Fig. 2), and 0.804 (subjects outside the ICU). The differences between AUROCs are summarized in Table 2. There was a significant difference between the AUROCs of PCT and PCT–qSOFA in all patients. In addition, the AUROCs of qSOFA and PCT–qSOFA were significant even after excluding patients outside the ICU.

Table 2 . Pairwise comparison between areas under the ROC curve 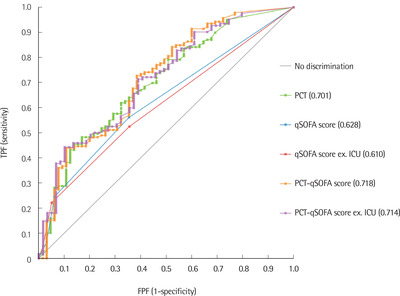 4. Post-test probability analysis to define the diagnostic value of PCT-qSOFA

Table 3 . Post -test probability analysis results used to define the diagnostic value of the combined use of PCT and qSOFA scores for the identification of patients with sepsis

Sepsis is a severe disease and the primary cause of death from infection [9]. The clinical and biological phenotypes of sepsis depend on the preexisting acute illness, long-standing comorbidities, medication usage, and interventions [10]. Sepsis differs from infection in that it is an aberrant or dysregulated host response and is associated with organ dysfunction [10].

The first definition of sepsis was based on SIRS and it included fever, tachypnea, hyperventilation, and leukocytosis [3]. The newly introduced Sepsis-3 definition that was established in 2016 defined the word “sepsis” as life-threatening organ dysfunction caused by a dysregulated host response to infection [1, 2]. However, the SOFA scoring system showed significant discrepancies when used to distinguish organ failure from infections [11]. It was not easy to differentiate heterogeneous contexts, such as hypovolemia, severe heart failure, or severe pulmonary embolism, from sepsis using SOFA scores [2], and the application of SOFA could delay the detection of sepsis before organ failure occurs.

The current study evaluated the combination of PCT and qSOFA rather than SOFA because evaluating the qSOFA score is easy for nurses and other medical workers who treat critical patients [1]. PCT is a well-known indicator that is useful for the early confirmation of systemic inflammation and provides guidance for antibiotic therapy [4]. There are many other biomarkers for sepsis, such as C-reactive protein (CRP), lactate, and cytokine levels. However, the CRP biomarker has a relatively low specificity [4, 12]. Lactate concentration is inadequate for use as an early indicator, and cytokine levels do not show a significant advantage over PCT in this respect [4, 12]. Moreover, the application of PCT–qSOFA may be more convenient if PCT is measured using a point-of-care device at the bedside [13].

Although this was the first attempt to combine PCT and qSOFA for the diagnosis of septicemia in Korea, other biomarkers are also needed to evaluate the diagnostic performance. Although the qSOFA score is known to be applicable to patients in the ICU, we attempted to apply it to all patients, including patients in the ICU, and found that PCT–qSOFA showed meaningful results with the modification of criteria from the presence of 2 or more qSOFA points to one.

There has been debate regarding suspicions of the diagnostic accuracy of SOFA and qSOFA on the basis of the Sepsis-3 definition [14]. The new definition requires the presence of organ failure. Additionally, the SIRS criteria have been deleted altogether. Many heterogeneous contexts (for example hypovolemia, cardiac failure, and pulmonary embolism) were misdiagnosed as sepsis with qSOFA. On the contrary, hypoxemia, renal failure, coagulation defects, and hyperbilirubinemia could be missed with qSOFA. This may be the reason qSOFA was proposed for the non-ICU setting initially. We are of the opinion that PCT responds to systemic inflammatory response and compensates for qSOFA.

The limitation of this study is that it is a single-center analysis involving fewer subjects. A multicenter study is needed to secure more evidence. In conclusion, PCT–qSOFA is useful for evaluating sepsis in the ICU setting also. We recommend the application of PCT–qSOFA for the diagnosis of sepsis, regardless of ICU admission.

This study was funded by a grant from the Korean Society of Diagnostic Immunology.