Zika virus (ZIKV), a member of the family, was first isolated in 1947 from the serum of a febrile rhesus monkey in Uganda [1]. ZIKV is mostly transmitted to humans via mosquitoes, mainly and less commonly by . In 2007, a ZIKV outbreak in humans occurred on the island of Yap, Micronesia, and spread throughout Oceania until late 2013 [2]. In May 2015, ZIKV infection was confirmed in Brazil and continued to spread to the continent of South America [3]. The World Health Organization (WHO) classified ZIKV as a public health emergency of international concern, and recent data reported ZIKV transmission in about 75 countries [4]. Traveling has contributed to the expansion of ZIKV to non-endemic countries. For example, the first ZIKV infection case in Korea in 2016 was reported in a traveler who had returned from Brazil [5]. Since then, ZIKV infections have been reported in Korea in travelers from south-eastern Asia and South Africa [6].

ZIKV can be transmitted not only through vector-borne routes but also through non-vector-borne routes such as sexual intercourse, transplacental transmission, blood product transfusion, and body fiuids. More than 70% of ZIKV-infected patients are asymptomatic [7]. Even in symptomatic patients, the clinical conditions such as maculopapular rash, mild fever, arthralgia, conjunctivitis, myalgia, and headache are similar to the symptoms of dengue virus or other mosquito-borne fiavivirus-related infections, and can be confused with other causes of febrile illness [8]. The most significant consideration in ZIKV-infected patients is the causal relationship between ZIKV infection in pregnant women and the development of birth defects [9]. Therefore, prevention of ZIKV infection in pregnant women is imperative.

ZIKV infection can be diagnosed through the detection of ZIKV-specific immunoglobulin M (IgM) antibodies and from the presence of ZIKV RNA or antigens. According to the WHO guidance, IgM antibody positivity alone cannot be deemed sufficient for the diagnosis of ZIKV infections [10]. Instead, ZIKV infection is characterized with the presence of ZIKV RNA or antigens in the serum or other samples, IgM antibodies against ZIKV, or anti-Zika antibodies in the plaque reduction neutralization test. As plaque reduction neutralization test is labor-intensive [10], the diagnosis of ZIKV infection mainly relies on the detection of ZIKV RNA. ZIKV RNA detection using reverse transcription-PCR (RT-PCR) is useful during the acute phase, which encompasses the first 7 days from symptom onset. RT-PCR-mediated detection of ZIKV using urine, serum, and saliva samples proved urine samples to be the most reliable and sensitive for identification of acute ZIKV infection [11, 12].

A total of 168 urine specimens were analyzed in this study (Fig. 1). In total, 127 clinical specimens of symptomatic patients were provided by Boca Biolistics (Pompano Beach, FL, USA); these specimens were collected from patients with ZIKV-like symptoms. Clinical information on the samples from Boca Biolistics LLC is given in Table 1. In addition, 25 ZIKV-positive samples were sourced from the dilution of ZIKV RNA-containing lyophilized plasma, which is the candidate WHO international standard for ZIKV RNA nucleic acid amplification technique-based assays. In addition, 16 negative samples from asymptomatic pregnant Korean women were obtained. The clinical sample collection protocols were approved by the Bioethics Committee of the Hospital de la plaza de la Salud (BB-ID-061; Santo Domingo, Dominican Republic) and the Institutional Review Board of Korea University Guro Hospital (MD16075; Seoul, Korea). 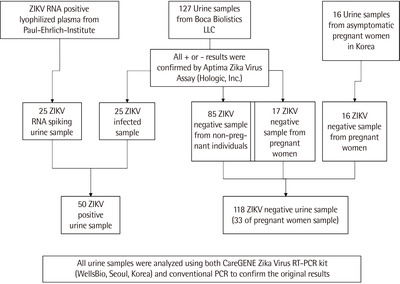 Twenty-five natural positive urine specimens were provided by Boca Biolistics, and were confirmed positive for ZIKV RNA using the Aptima Zika Virus Assay (Hologic, Inc., San Diego, CA, USA). Twenty-five positive specimens were prepared by spiking the negative urine samples with ZIKV RNA. Positive RNA was the candidate for the WHO international standard (PEI code 11468/16; Paul-Ehrlich-Institute, Langen, Germany) and included 0.5 mL of lyophilized plasma and the non-infectious Asian strain of ZIKV RNA containing 50,000,000 U/mL. This WHO standard ZIKV was diluted by negative urine specimens obtained from Boca Biolistics that were confirmed as ZIKV negative using the Aptima Zika Virus Assay. The spiked samples were prepared at concentrations of 1, 2, 3, and 4 U/mL of ZIKV RNA.

The QIAamp Viral RNA Mini Kit (Qiagen, Hilden, Germany) was used for RNA extraction. Urine (140 μL) sample was added to a 1.5-mL microcentrifuge tube containing 560 μL of AVL buffer with carrier RNA. The mixture was incubated at room temperature (20-22°C) for 10 minutes. Ethanol (560 μL) was added to the mixture and mixed by pulse-vortexing for 15 seconds. After mixing, the tube was briefiy centrifuged to collect droplets from the inside of the lid and sides to the bottom. The resulting solution (630 μL) was carefully applied to the QIAamp Mini column equipped with a 2-mL collection tube without a wetting rim. The cap of the column was closed and the column was centrifuged at 6,000×g for 1 minute. To wash the column, the cap was opened and 500 μL of AW1 buffer was added. The column was centrifuged at 6,000×g for 1 minute. The column was washed again with 500 μL of AW2 buffer, and the RNA was eluted with 60 μL of nuclease-free water.

Real-time PCR was performed to amplify NS5B and envelope genes of ZIKV using careGENE™ ZIKV RT-PCR Kit (Wells Bio. Inc.) on an Applied Biosystems 7500 Real-Time PCR system (Life Technologies, Carlsbad, CA, USA). The assay was performed in a 15 μL reaction mixture containing 5 μL of 4×1 Step RT-PCR Mix, 5 μL of Zika primer/probe mix, and 5 μL of nuclease-free water. The mixture components were prepared on ice, and 5 μL of extracted RNA was well mixed with 15 μL of mixture components. The optimized thermal cycling conditions were as follows: reverse transcription at 50°C for 15 minutes, initial denaturation at 95°C for 20 seconds, and 40 cycles of PCR amplification at 95°C for 15 sec and 58°C for 60 seconds. Probes for ZIKV-specific sequences were labeled with the fiuorophores FAM and CY5/Alexa647 for dual detection. The probe for the internal control (IC)-specific sequence was labeled with the fiuorophore VIC or HEX. The careGENE™ ZIKV RT-PCR Kit includes an endogenous IC, which can be used to control the sample preparation procedure (nucleic acid extraction) and/or as an RT-PCR inhibition control (Table 2). The real-time PCR results were defined based on the following criteria: the sample was positive if the Ct value was <36 with acceptable results or considered negative if the Ct value was ≥36 (Table 3). Representative results of positive and negative samples were shown on Fig. 2. 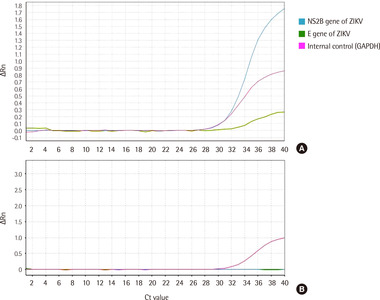 3) Sensitivity and specificity of the real-time PCR assay

4) Conventional PCR for confirmation of the results

To confirm all positive and negative results, conventional PCR was performed. Amplification was carried out using the ZIKV primer pairs targeting NS4A (Table 4). PCR was carried out using an initial activation step at 94°C for 3 minutes, followed by 30 cycles of 94°C for 30 seconds, 58°C for 30 seconds, and 72°C for 30 seconds, with a final extension step for 7 minutes at 72°C. Conventional PCR products were detected by agarose gel electrophoresis, and positivity of amplification products was confirmed following comparison with positive control bands.

Table 4 . Forward and reverse primer sets for the conventional PCR amplification of ZIKV

Twenty-five naturally positive specimens that were previously confirmed to be positive using the Aptima Zika Virus Assay and 25 positive RNA-spiked specimens from the Paul-Ehrlich-Institute were tested positive for ZIKV using the careGENE™ ZIKV RT-PCR Kit and the conventional PCR method (Table 5). For the clinical sensitivity evaluation, 25 ZIKV-infected clinical urine specimens tested positive with 100% sensitivity. These clinical specimens were obtained between 2 and 10 days after the onset of symptoms; 24 of 25 specimens were obtained within 7 days of symptom onset (Table 1). Lyophilized ZIKV RNA-containing samples were diluted with negative urine samples to concentrations of 1, 2, 3, and 4 U/mL of ZIKV RNA. The detection limit of the assay was 1 U/mL for ZIKV RNA; 13 repeat measurements of 1 U/mL of ZIKV RNA-containing samples tested positive. Ct values of RNA-spiked samples were detected by real-time PCR and found to be between 28 and 32 for NS2B gene and between 32 and 36 for E gene.

The clinical signs and symptoms of ZIKV infection are similar to those of dengue virus or other mosquito-borne fiavivirus-related infections. The most common signs and symptoms include maculopapular rash, mild fever, arthralgia, conjunctivitis, myalgia, and headache [8]. However, more than 70% of infections are asymptomatic [7]. The most significant clinical condition is neonatal infection. ZIKV-associated congenital defects owing to vertical viral transmission from the mother to the fetus are clinically significant and have been well documented [9]. Aside from mosquito bites, ZIKV can be transmitted through sexual contact. Further, ZIKV infection via transfusion of infected blood products remains a significant concern. About 1.1% and 2.8% of asymptomatic blood donors were tested positive for ZIKV during their respective outbreaks [11, 13]. Moreover, immunocompromised patients can be infected by transfusion from an asymptomatic ZIKV-infected blood donor [7]. ZIKV infection through blood transfusion to immunocompromised patients such as transplant recipients has been recently reported [7, 8]. Therefore, ZIKV screening of asymptomatic individuals such as pregnant women, travelers, and blood donors should be emphasized. For the ZIKV screening test, a sensitive detection method is warranted.

The ZIKV genome is composed of three structural units, including the capsid, membrane precursor/membrane, and envelope proteins, and seven non-structural proteins. There are various molecular assays to detect ZIKV, but only a few were developed to detect two gene targets [15]. The careGENE™ ZIKV RT-PCR Kit was developed based on real-time RT-PCR technology exploiting an RT reaction to convert RNA into complementary DNA, followed by PCR to amplify the specific target sequences (E and NS5B genes) and target-specific probes for detection of the amplified DNA. ZIKV genetic variations have been reported as two lineages (African and Asian) and three genotypes (West African, East African, and Asian). Up to 10 nucleotide mismatches have been identified between a previously published assay and Asian lineage consensus sequences [16]. Therefore, a ZIKV RNA detection test designed to detect a single RNA target may produce false-negative results, whereas multiple target ZIKV RNA detection can reduce false-negative results. The careGENE™ ZIKV RT-PCR Kit using dual detection of the E and NS5B genes of ZIKV with FAM and CY5/Alexa647 probes could increase the sensitivity and specificity of ZIKV detection.

The careGENE™ ZIKV RT-PCR Kit is a sensitive assay to detect ZIKV RNA in urine specimens. The detection limit of the assay was 1 U/mL in the urine, which is deemed satisfactory for a diagnostic test.

This study was supported by a government-wide R&D fund project for infectious disease research (HG18C0012), National Research Foundation of Korea (NRF-2016R1A5A1010148) and a grant of the Korea Health Technology R&D Project through the Korea Health Industry Development Institute (KHIDI), funded by the Ministry of Health & Welfare, Republic of Korea (grant number: HR20C0021).