The Sanger sequencing method is mainly used to detect mutations in and . However, it is time-consuming, labor-intensive, and expensive owing to the large size of and genes and the scattered mutations along these genes [10]. Next-generation sequencing (NGS) has been increasingly applied in cancer research and molecular diagnosis to simultaneously screen and intensively analyze different target genes [9]. This technique allows the genetic screening of and mutations to provide a high-throughput, quick, highly cost-effective, and comprehensive genome analysis.

We aimed to evaluate the clinical performance of BRCAaccuTest™ (NGeneBio, Seoul, Korea). We evaluated the analytical performance of the BRCAaccuTest™ kit as an NGS-based in vitro diagnostic (IVD) reagent. We also evaluated the ability of an NGS analytic software called NGeneAnalySys™ (NGeneBio) to automatically detect mutations in and genes and perform pathogenic classifications.

To investigate the analytical performance of BRCAaccuTest™, control DNA samples were purchased from Coriell Institute (https://www.coriell.org/; See Supplemental Data Table S1). To test sensitivity (limit of detection), the input DNA was used at 50-, 10-, 5-, 1-, and 0.5-ng concentrations. Three reference DNAs, NA13713, NA14636, and NA14624, were used as positive controls of deleterious variants of either or . Different amounts (50, 10, 5, 1, and 0.5 ng) of each reference DNA were tested twice in separate experiments to assess the range of input gDNA. For the specificity test, healthy blood samples were supplemented with interfering substances such as bilirubin, hemoglobin, and cholesterol. Genomic DNA (gDNA) was extracted using a QIAGEN Blood DNA mini kit (Qiagen, Hilden, Germany) according to the manufacturer’s instructions. In addition, the wash buffer from the DNA extraction kit was added as an interfering substance in the test sample (See Supplemental Data Table S2). To evaluate reproducibility, the experiment was carried out at two different locations, on different dates, with different batches of kits (different lot numbers), and/or performers. The input DNA was used at 10–50-ng concentrations, and two to three technical replicates were prepared for each test.

The clinical samples used in this study were obtained from the Seoul National University Hospital (SNUH). Briefiy, gDNA was extracted from patients who underwent testing from 2008 to 2015. The previous test was applied to sequence and by the typical Sanger sequencing method at SNUH; the sequencing results were accumulated and well-documented by SNUH. Therefore, the leftover gDNA were identical to those used in the Sanger method and exploited to investigate the diagnostic consistency between the Sanger sequencing method and BRCAaccuTest™.

The residual gDNAs were maintained and controlled as per the regulations of the Ministry of Food and Drug Safety (MFDS) in the Republic of Korea and the Institutional Review Board (IRB) at SNUH. The samples satisfied the following criteria: 1) quantity was more than 100 ng for NGS or 5 μg for the Sanger method, 2) quality (A260/280) was 1.8–2.0, and 3) the storage period was less than 10 years. Samples were excluded from the study if they did not meet these criteria.

This was a retrospective study performed by a single laboratory at SNUH under the regulation of MFDS in the Republic of Korea and IRB. It was a comparative study to assess the clinical utility and diagnostic consistency of BRCAaccuTest™ in comparison to the traditional Sanger sequencing method. As shown in Fig. 1, the target number of test samples was calculated based on the following criteria: diagnostic positive/negative agreement, 0.99; power, 80%; and statistical significance, 5% [11] with an additional 10% to compensate for drop-outs such as samples out of criteria. Therefore, the target number was initially set to 190 plus 22 extras for testing both and . Thus, the test samples for or were prepared with 106 samples each (total of 212 samples). Approximately 10% of the 212 test subjects (22 samples) were sequenced using the Sanger method to verify stability using an Applied Biosystems 3730xl DNA Analyzer (Applied Biosystems, Foster City, CA, USA) and a BigDye Terminator v3.1 Cycle Sequencing Kit (Applied Biosystems) according to the manufacturer’s instructions. Ultimately, 207 samples met the calculated sample size (N=190). 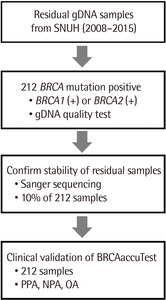 BRCAaccuTest™ was used to generate the NGS library of (NM_007294.3) and (NM_000059.3) genes according to the manufacturer’s instructions. Briefiy, the target regions of and genes were amplified using 10–50 ng of sample DNAs by the polymerase chain reaction (PCR). The amplicons were ligated using adaptors, and the library was amplified at the final step. Quantity and quality of the amplified library were evaluated using a Qubit® 3.0 Fluorometer (Thermo Fisher Scientific, Waltham, MA, USA) and Tapestation 2200 (Agilent Technologies, Santa Clara, CA, USA), respectively. After quality control (QC), the final library was normalized to a concentration of 4 nM and prepared for sequencing using an Illumina MiSeqDx® with MiSeq Reagent Nano Kit V2 (300 cycles) (Illumina, San Diego, CA, USA) as per the manufacturer’s instructions to generate pair-end reads.

The pipeline workfiow of data analysis was as follows: data QC, adapter trimming, alignment, variant calling, and annotation. Sequence reads generated were trimmed using Sickle v1.33 [12], a windowed adaptive trimming tool for sequencing adapters, and then aligned to the human hg19 reference genome using the BWA-MEM algorithm v0.7.10 [13]. Genetic variants, including SNVs and short insertions/deletions (indels), were identified using GATK v2.3 [14] and FreeBayes v9.9.2 [15], and the identified variants were annotated by snpEff v4.2 [16]. This bioinformatic pipeline was fully automated in NGeneAnalySys™ software. Sequence reads generated as FASTQ files could be uploaded on NGeneAnalySys™ to analyze, annotate, classify, and visualize NGS sequencing results, including clinical reports. Variants were classified according to the ACMG Standards and Guidelines for the Interpretation of Sequence Variants [17]. According to NGeneAnalySys™, the QC criteria for uniformity were set as follows: minimum coverage at >20× and average coverage at >200×.


To investigate the precision of BRCAaccuTest™, its reproducibility was tested by changing experiment performers, laboratories, dates, and lot numbers. The experiments for all combinations were carried out with three positive controls (NA13713, NA14636, and NA14624) and one negative control (NA12878). All samples were duplicated.

The analytical performance of BRCAaccuTest™ was tested to confirm its sensitivity, specificity, and precision. The test results demonstrated the successful production of all the sequenced libraries with an average 300× coverage depth in the target regions. Each representative mutation in the control DNA was also perfectly detected with 0.5 ng input DNA (Table 1). The NGS results illustrated no effects of the interfering substances on library preparation using BRCAaccuTest™ (Table 1). The precision of BRCAaccuTest™ showed 100% reproducibility in all combinations, namely, within-run, between-run, between-person, and between-lot (Table 1).

Approximately 10% of 212 test subjects (22 samples) were sequenced by the Sanger method to verify the stability of residual gDNA samples. All Sanger resequencing results were consistent with the previous ones. As the stability of the remaining samples was verified, subsequent NGS analysis was performed on 212 samples. In total, 207 samples (B001 to B207) were selected to create NGS libraries. These were divided into nine groups (runs) of 23 samples that were run on MiSeqDx® because the appropriate capacity of BRCAaccuTest™ is up to 24 samples, including 1 control (NA12878). The input DNA range of the 207 samples was 11.6–48.8 ng, and the average input DNA amount was 30.1±7.5 ng. The average time for library preparation for each group was 4.5–5.0 hours.

Figure 2. Quantity and size of the final libraries. (A) The libraries of samples B001 to B207 were quantified and represented in nanomole (nM) quantities in correlation to the amount of input DNA (ng). The black dashed lines indicate the range of the input DNA used in this study. The red dashed arrow represents the average concentration of the library. The blue dashed arrow represents the minimum concentration of the library. (B) The size of each library was individually determined and represented as a dot. The red dashed line indicates the average size (bp) of the library. The blue dashed lines represent the range of the library size (300–500 bp). B021 was excluded owing to an insufficient amount of sample.

We successfully performed nine runs of NGS. Overall QC rejection rate was 4%. Only one sample, B022, showed a 13× minimum coverage at a QC failure rate of 0.04%. Therefore, there was no issue in analyzing the variants, as the minimum coverage region was irrelevant (data not shown). In addition, 95.6% of samples met the QC criteria of the average coverage.

The BRCAaccuTest™ results at all 199 positions were compared with those of the Sanger sequencing assay. Within the 198 individual samples, 1,640 mutations and 37,762 wild-type calls were detected. The agreement analysis results are shown in Table 3. Variant-level concordance (PPA and NPA) was 100% for all results with 95% confidence intervals of 99.8–100.0% for mutations (PPA) and 99.9–100.0% for wild-type location (NPA).

Many diagnostic laboratories use NGS technology to enhance throughput and reduce turn-around time and cost. However, NGS may introduce complexity resulting from the selection of components of the test workfiow, including the NGS platform, enrichment methods, and bioinformatic analysis processes.

The report described an NGS-based IVD reagent and analysis software for gene testing that are more efficient than the existing Sanger sequencing method. Further, this study tested the analytical performance of an NGS approach for mutation analysis in HBOC patients. The comparison of NGS and the gold standard Sanger sequencing revealed 100% sensitivity and 100% specificity in all coding exons of and 10 bp into the introns from intron/exon junctions of 212 HBOC samples.

NGS exhibits great potential by allowing rapid mutational analysis of multiple genes in HBOC [18]. However, a reliable tool is desirable to take advantage of these opportunities to extract information from the big data generated by NGS. False-positive SNVs were directly adjacent to the 3′-end of one of the first PCR primers and were detected in only one strand [19, 20]. False-negative results have also been reported, missing the pathogenic mutation owing to differences in the NGS platform and library formation [21]. Hence, caution is required while sequencing to avoid false-positive results.

The bioinformatic pipelines provide an automated workfiow for the processing of NGS data for genes using variant filters adapted to the amplicon-based target NGS data [18]. However, in the present study, the entire NGS technique from wet laboratory steps to bioinformatic analysis was managed using a single kit; this process is critical to maintaining accuracy. BRCAaccuTest™, including NGeneAnalySys™, is an all-in-one method comprising the complete NGS procedure from library preparation to automated post-processing bioinformatic pipeline and interpretation.

This study has a limitation stemming from the exclusion of large genomic rearrangement in the NGS assay for . PCR enrichment is unsuitable for the reliable detection of copy number variants (CNVs) [9]. A recent study showed that the detection of rearrangement is still challenging, especially in the case of exon 2 in , where false-positive CNV calls may be observed [22]. The assay for rearrangements by NGS requires substantial improvement in algorithms in order to be used in clinical practice.

In conclusion, BRCAaccuTest™ can be exploited for clinical purposes, as it provided positive, negative, and overall diagnostic consistency of 100% with Sanger sequencing at a significance level of 5%. In addition, NGeneAnalySys™ can be used clinically to analyze data generated from BRCAaccuTest™ for screening pathogenic variants of the genes.

Table S1. Control DNAs and their representative heterozygous mutations used in the analytical validation of BRCAaccuTest™