Cardiac troponin (cTn) assays performed within 1–3 hours of admission are recommended to rule out AMI. The cTn assay can detect circulating cTn at extremely low concentrations and thus offers high diagnostic performance [3, 4]. Although the availability of cTn assays allows earlier AMI detection, increased cTn concentration can be observed in the absence of acute coronary syndrome. Therefore, the increasing number of patients with elevated cTn values renders the differential diagnosis in the emergency department challenging for clinicians [5]. Particularly, it is difficult to exclude AMI when the degree of cTn elevation is mild, thereby necessitating serial measurement of cTn.

Copeptin, the C-terminal part of the pro-arginine vasopressin precursor peptide, has been considered an alternative biomarker for the detection of evolving AMI [6]. Copeptin is released quickly after the onset of symptom and can compensate for troponin limitation, that is, its late release from the damaged myocardium [7]. Moreover, previous studies revealed that the copeptin plus hs-cTn combination aids in reliably ruling out AMI [8, 9]. A cTn level below the 99th percentile and copeptin level below 10 pmol/L exhibit high negative predictive values (NPVs) when used in combination with ECG [10]. Moreover, copeptin levels can help in predicting infarct size and alterations in myocardial function in patients with STsegment elevation myocardial infarction (STEMI) [11]. However, few studies have been performed on the additional value of copeptin in patients with mild cTn elevation.

In this study, we evaluated the diagnostic value of copeptin levels for NSTEMI in patients who are presented with chest pain and mild cTn elevation in the emergency department. We also investigated whether the risk scoring using simultaneous assessment of cardiac biomarkers would aid in reducing false-positive cTn results in NSTEMI diagnosis.

The study population included all the patients who were admitted to the emergency department between August 2017 and March 2018 for non-traumatic chest pain. On admission, an ECG was performed, and blood samples were collected. The cardiac troponin I (TnI) level (reference range, 0.01–0.04 ng/mL) was measured for each patient. The patients with mild TnI elevation (>0.04 and <1.0 ng/mL) were enrolled. The range of mild TnI elevation was defined based on the change in the diagnostic cutoff between 1995 and 2007 [12].

The exclusion criteria included STEMI, stroke, renal disease, infection, and late presentation for more than 6 hours after chest pain. The diagnosis was made by a physician using all available data, such as ECG, cardiac markers, and percutaneous coronary intervention results. Patient records were reviewed for AMI occurrence within 12 months of discharge in patients without NSTEMI. All study participants provided informed consent, and the study design complied with all the relevant national regulations and institutional policies and is in accordance with the tenets of the Helsinki Declaration. This study was approved by the institutional review board of our institution.

Continuous variables were presented as mean±standard deviation (SD) or median (interquartile range) and were compared using analysis of variance (ANOVA) or the Kruskal–Wallis test (if not normally distributed). Categorical variables were expressed in terms of rates or proportions and were compared using the chi-square test or Fisher’s exact test. The diagnostic performance of all cardiac markers were assessed using receiver operating characteristic (ROC) curve analysis. Analyses were performed using MedCalc version 19.6 (MedCalc Software, Mariakerke, Belgium).

A total of 180 patients (age, 68.2±13.3 years; M:F, 113:67), who presented with non-traumatic chest pain and admitted to the emergency department, met the inclusion criteria and were included as study population. Among those patients, 49 patients (27.2%) were diagnosed with NSTEMI, and 131 (72.8%) were diagnosed with non-NSTEMI. The non-NSTEMI group comprised 64 patients (35.6%) with angina and 67 patients (37.2%) with other diseases. In two-thirds of cases with mild cTnI elevation, non-ischemic causes were observed.

The clinical characteristics are summarized in Table 1. The age of the patients did not significantly differ among the groups; however, the number of men in the angina group was lower than that in the NSTEMI group. During the follow-up period, AMI events did not occur in any of the cases in the non-NSTEMI group.

Table 1 . Characteristics of study population and their levels of cardiac markers

2. Cardiac markers according to the diagnostic groups 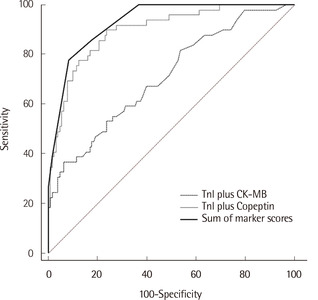 4. Diagnostic accuracy for the sum of cardiac marker scores (SMS)

Table 2 . Scores based on the levels of cardiac biomarkers

Both CK-MB and copeptin levels were significantly higher in the NSTEMI group than in the non-NSTEMI group; however, their NPVs and PPVs for detecting NSTEMI differed. As a diagnostic marker, elevated CK-MB levels were specific for myocardial cellular injury and were observed almost simultaneously with TnI elevation. Copeptin is a marker of acute stress independent of cardiac cell necrosis; however, its initial rise is observed early, that is, within 1 hour after the onset of MI symptoms, as compared to 2–3 hours for TnI [13]. In our cases with mild TnI elevation, the NPV of copeptin was excellent (93.5%); however, the PPV was not good. Due to the higher NPV, the copeptin assay was superior to the CK-MB assay, excluding NSTEMI in patients with chest pain accompanied by mild troponin elevation. The elevation of CK-MB levels was strongly associated with NSTEMI because of the higher PPV.

Previous studies have reported that the use of dual markers (copeptin and cardiac troponin) increases the NPV for myocardial infarction in patients with chest pain [14–16]. A meta-analysis revealed that the copeptin plus cTn combination had significantly greater sensitivity and NPV for NSTEMI than cTn alone [17]. In our patients with mild troponin elevation, the NPV of copeptin was excellent, and copeptin plus TnI exhibited higher diagnostic accuracy than CK-MB plus TnI for NSTEMI, as revealed by the AUC values (0.898 vs. 0.711). We suggest that the use of complementary markers would increase the accuracy of TnI analysis; the addition of copeptin would be useful in differentiating non-NSTEMI from NSTEMI in patients with chest pain and mild troponin elevation.

The more TnI exceeded the cutoff (0.04 ng/mL), the more likely that NSTEMI would be confirmed. The scores of TnI levels were divided into three sections from 0 to 2. As elevated levels of CK-MB suggested the possibility of NSTEMI, the scores of CK-MB levels were assigned 0 and 1. TnI plus copeptin increased NPV, and therefore, the score of copeptin levels was divided into four sections from -1 to 2. The median SMS was significantly higher in the NSTEMI group than in the non-NSTEMI group. A high SMS of 2 or more supports the diagnosis of NSTEMI, whereas a low SMS of -1 may exclude NSTEMI. However, the diagnostic performance of SMS was similar to that of the combination of TnI and copeptin, and a scoring system was not proven to be necessary.

In addition to AMI, copeptin is linked to various other diseases, including exposure to endogenous stress [21]. In non-NSTEMI patients with a high SMS (≥2), the reason for high SMS was moderate to high increase (>35.0 pmol/L) of copeptin, and the degree of copeptin increase in the NSTEMI group was not associated with the future development of cardiac events. An increase in copeptin levels is not specific to AMI; therefore, copeptin should be used as an adjuvant biomarker and not as a single marker for analysis.