Differential complete blood cell count (CBC) employed for the diagnosis of hematological and various other diseases is one of the most widely used tests [1, 2]. As rapid and accurate reporting of differential CBC is important in patient care, various automatic blood cell analyzers have been developed [1]. Since the first use of automated analyzers, manual techniques, especially microscopic examination of stained blood films, have complemented analyzer results to provide a comprehensive hematology report of patient blood samples [3].

In general, blood samples are divided into routine and urgent samples in clinical laboratories according to time and needs for proper patient management. Urgent samples are those that need to be processed within 1-3 hours after sample collection. In this sense, the turnaround time of differential CBC is important for diagnosis and patient management, especially for urgent samples. We believe that clinical laboratories need a system that accurately and quickly reports differential CBC. In this study, we review the workflow of urgent and routine specimens for leukocyte differential count and evaluate ways to improve detection rate of hematologic malignancy. The aim of this study is to validate the hematology rapid reporting system (HRS) for differential CBC and establish a strategy to effectively apply automatic hematology analyzers for blast detection in clinical laboratories.

We retrospectively reviewed all patients who underwent CBC tests at Korea University Guro Hospital (Seoul, Korea) from October 19, 2020 to December 6, 2020. During this period, the data from 57,387 specimens were included and those from 4,520 specimens were excluded following data cleaning process for the following reasons: overlapping specimen identification number, inadequate specimen, specimen data with two decimal points (e.g., 33.833.8), and specimen with no data. Therefore, we evaluated 52,867 specimens in total.

This study was approved by the Institutional Review Board of Korea University Guro Hospital, Seoul, Korea (IRB No. 2021GRO106).

Microscopic examination of blood films was performed to evaluate and compare the findings of the flags detected. This required a trained laboratory technologist and careful assessment of the distribution, size, shape, color, cellular inclusions of red blood cells (RBCs) and other major cell types using microscopy. The results were interpreted as per the patient’s clinical details (history and physical examination). The samples were Wright-Giemsa stained using an automated slide maker/stainer, SP-1000i (Sysmex, Kobe, Japan). A count of 100 or 200 cells per sample was considered as a suitable reference method to compare the findings of the flags detected.

The establishment of criteria for peripheral blood smear (PBS) was based on the HRS workflow shown in Fig. 1. The samples were classified as per the criteria and following comparison with the findings of PBS. A sample was classified as true positive (TP) if it was selected to review as per certain screening criteria and positive PBS results with blast findings. A sample was classified as presumptive negative if it was not selected to review for PBS or did not meet any screening criteria for PBS. The samples that were not subjected to microscopic examination in the HRS workflow were considered negative if there was no blast and no flag in the automatic hematology analyzer. 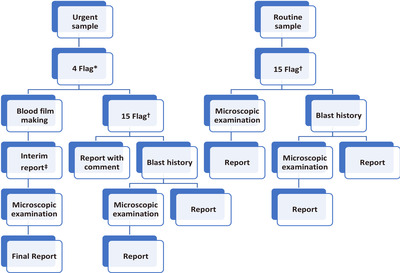 For blood analysis, blood samples were intravenously collected in 4 mL ethylenediaminetetraacetic acid (EDTA) tubes and patients were categorized into two groups, urgent and routine. For urgent samples, urgent flags were reviewed, and additional blood films and interim reports were prepared if more than one urgent flag occurred. Microscopic examination was performed and reported in accordance with the results. For routine samples, routine flags were reviewed, and additional microscopic examination was performed if more than one routine flag was detected. For both urgent and routine samples, each patient was reviewed for the presence of blast history by assessing medical records in cases all flags were negative. Then, the presence or absence of blast history was manually entered into the special category of laboratory department in the electronic health record (EHR) for further evaluation and follow-up of the patient. If the patient had blast history, microscopic examination of blood film was required before reporting.

We used two combinations of the flagging system parameters from automatic hematology analyzers, “routine” and “urgent” flags, as test methods. We used microscopic examination of blood films as the reference method, and evaluated each test method’s sensitivity and specificity to investigate the most efficient blast detection method that could improve laboratory productivity. We analyzed different parameters such as age and CBC characteristics by a receiver operating characteristic (ROC) curve. Method comparison figures were produced and statistical analyses was carried out using MedCalc (MedCalc Software Version 20.014, Mariakerke, Belgium) and Microsoft Excel (Microsoft, Washington, USA).

52,626), respectively, with urgent samples (four flags) and 92.95% (224/241) and 98.49% (51,831/52,626), respectively, with routine samples (15 flags). The sensitivity of HRS in routine samples was significantly different from that in urgent samples (<0.0001). However, there was no significant difference in the specificity of HRS between routine samples and urgent samples (=1.00). We also analyzed the relationship between detection of blasts in PBS and various parameters by ROC analysis (Table 2). Table 2 lists the different filters or cut-off values with corresponding sensitivity and specificity of the test. Hb (cut-off value ≤104 g/L) and platelet count (cut-off value of ≤86×109/L) showed the overall highest correlation (Fig. 2). Variables such as age, Hct, eosinophil (Eo), neutrophil (Ne), PLT, and RBC followed.

Table 2 . Relationship between detection of blast and various parameters by ROC analysis

Many laboratories perform microscopic examination of blood films to detect abnormal cells when flags of automated hematologic analyzers are generated. More than 80% of microscopic examinations are triggered by automatic hematology analyzer flags [9]. The usefulness of instrument-generated flags depends on their sensitivity and specificity [2]. If the flag system is less sensitive, clinically important diseases such as leukemia may be missed and clinicians are often unable to reliably classify abnormal cells and blasts. If the flag system is too sensitive, it may be burdensome for clinical laboratories to review too many slides. It is very important for clinical laboratories to find blasts in patient blood samples because if blasts are missing, clinicians cannot diagnose or treat patients with suspected hematologic malignancies. It is necessary to establish an appropriate strategy for screening patients for whom microscopic examination of blood films using blood test results and flag systems is deemed imperative to ensure that the blast detection rate is accurate without imposing excessive burden on the laboratory. Examination of blood films is not only labor-intensive but also requires trained staffs. To avoid wrong diagnosis, it is necessary to have an experienced staff in the laboratory for 24 hours a day. High sensitivity of blast detection in routine hematology analyzer is important for the diagnosis and follow-up of hematologic malignancies.

Our findings indicate that the use of different combinations of flags from hematology analyzers and the use of HRS as per the results of flags are imperative for blast detection. It is important to note that 80 TP specimens for which blasts could not be detected using urgent flags (four flags) were reduced to 17 specimens using routine flags (15 flags). Thus, using more flags may lead to better blast detection rate. As shown in Table 1, blasts were additionally detected from 161 to 224 cases. Of the 63 additionally detected cases, 33 LS flag cases, 32 I2 flag cases, and 21 VL flag cases were identified. Many samples with two or more flags were also found. HRS with urgent flags detected 161 TP cases and HRS with routine flags detected 241 TP cases. Among urgent flags, NE, LY, MO, and Bl detected 76, 66, 79, and 18 TP cases, respectively. Among other flags, LS, IG, VL, HOV, LD, and NR detected 150, 143, 92, 16, 5, and 1 TP cases, respectively. Except urgent flags, LS and IG flags showed good performance for detection of blasts.

However, as any combination of flags cannot accurately detect all blasts, flags should not be employed as the only factor to detect blast risk in patients. Therefore, additional information for the patient group in each laboratory should be set. In our hospital, we evaluated blast history of patients in addition to the flags. In our study, 17 missed specimens using routine flags were reviewed for blast history and hematology department admission. Twelve of these specimens were prescribed under hematology department and all 17 specimens had blast history. This observation shows that the current blast workflow was effective and in this study period, none was missed after the review of patients with flags. Fortunately, during the study period, 17 patients were successfully screened after reviewing blast history. However, there is a possibility that 17 patients, which is 7.05% (17/241) of the specimens involved during the study period, may have been missed if they were newly admitted to the hospital. We can consider additional parameters in this case, such as hematology department prescription of the specimen.

We compared and evaluated the effectiveness of HRS using the urgent and routine flags. HRS using urgent flags had relatively low labor intensity with low sensitivity. HRS using routine flags were able to significantly improve the sensitivity. In addition, considering the data of CBC parameters, microscopic examination of blood films may be considered for patients over 73 years of age, those with Hb ≤104 g/L, and those with platelet count ≤86×109/L when clinically suspected of hematologic malignancy. However, it is difficult to apply these CBC parameters to HRS in our laboratory because of the heavy workload. While comparing 15 flags with 4 flags, the ratio of false negatives in 15 flags did not significantly increase and consequently did not increase the workload for microscopic examination. In addition, when blast history was added in the criteria, the sensitivity improved and it was possible to detect blast-positive patients that could be missed when only flags were used for screening. Therefore, we suggest that corrected HRS could improve sensitivity for detection of blasts (Fig. 3). In corrected HRS, we used blast history and 15 flags from hematology analyzers. We expect that corrected HRS will improve sensitivity for blast detection with optimal workload in further evaluations. 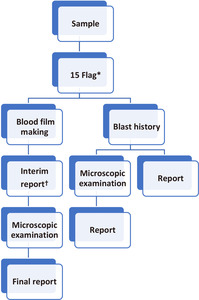 The limitation of this study is that it is retrospective in nature and comprised large-scale data; therefore, we were unable to collect the actual flag data directly from the hematology analyzer. Instead, we used the data retrieved from electronic medical record. In addition, there were 50 types of flags altogether from the hematology analyzer. We could not review and analyze all of them. As the blast histories of some patients were not included, the specificity of HRS, including blast histories, could not be accurately calculated. Some flag data were put together under “etc” category and could not be analyzed as separate entities. Another major limitation was that although 15 flags were expected to detect blasts with higher sensitivity, we did not directly analyze their efficiency in terms of workload; one may expect the workload to slightly increase. Although urgent and routine samples were analyzed using both DxH 800 and XE-2100, we did not evaluate the sensitivity of each equipment. There are some challenges with respect to the standardization of the screening criteria for PBS. Our hematology laboratory developed this system for PBS according to its clinical significance and need for PBS. However, given the large number of samples and the limited capacity of our laboratory, not all blood samples were reviewed for PBS. In addition, specificity may be overestimated for samples that were not subjected to microscopic examination following HRS workflow. There may be a difference between true negative and our negative results.