The worldwide efforts for the prevention of the spread of human immunodeficiency virus (HIV) infection have successfully decreased the incidence of new HIV infections [1]. However, the dramatic rise in the use of antiretroviral therapy (ART) will likely increase the prevalence of acquired drug resistance (ADR) among treated HIV-infected individuals and transmitted drug resistance (TDR) in newly infected patients [2]. HIV drug resistance is a common cause of treatment failure in HIV-infected patients. AIDS Info Guidelines for the Use of Antiretroviral Agents in HIV-1–infected Adults and Adolescents suggest that therapy for a treatment-naïve patient generally comprises two nucleoside reverse transcriptase inhibitors (NRTIs) in combination with a third active drug from one of three drug classes, namely, an integrase strand transfer inhibitor (INSTI), a nonnucleoside reverse transcriptase inhibitor (NNRTI), or a protease inhibitor (PI) with a pharmacokinetic enhancer [3]. The guidelines recommend initial antiretroviral regimens for most people with HIV as 1 INSTI plus 2 NRTIs or plus 1 NRTI, and additionally mention HIV drug resistance testing before the inception of treatment to guide the selection of the initial ART regimen. HIV drug resistance testing is also performed to assist the selection of active drugs while changing ART regimens, especially in patients with virologic failure and HIV RNA levels >1,000 copies/mL.

Data on DRM have been internationally published. Hattori et al. performed a drug resistance test on 3,904 HIV-1–infected cases in Japan and found the overall prevalence of TDR to be 9.1%, which was not significantly different between recent and long-term seroconverters [4]. Eleven of 127 drug-naïve and 13 of 117 first-line drug-treated HIV-1–infected individuals in Suzhou, China, had transmitted and acquired resistance mutations, respectively. Six TDR mutations (DRMs), including one major mutation, were found in the protease and reverse transcriptase regions [5]. In particular, INSTIs are the most recently introduced drug type and have been clinically used since 2007 [6]. Several recent studies have focused on uncovering INSTI resistance mutations [7-9].

According to the data from the Korea Disease Control and Prevention Agency, the prevalence of HIV in South Korea is very low, at less than 0.1%. The major subtype of HIV-1 is subtype B and the incidence of TDR ranges from 1.9% to 8.5% in South Korea [10-14]. Many HIV-1 DRMs have been reported in South Korea.

Clinical responses according to DRMs were analyzed in previous studies. Chin et al. calculated the sum of the average resistance mutation scores (SARMS) obtained from the Stanford HIV Drug Resistance Database (HIVDB) in each primary HIV-1–infected patient and found that the SARMS of patients with viral loads exceeding 100,000 copies/mL were significantly lower than those of patients with viral loads <100,000 copies/mL, suggesting that the resistant strains had decreased viral fitness [13].

The primary aim of this study was to investigate the prevalence and profile of HIV-1 DRMs in ART-naïve and ART-experienced patients in South Korea. The secondary purpose was to determine the correlation between the degree of drug resistance and the clinical response.

We retrospectively enrolled HIV-1–infected patients who underwent standard genotypic resistance testing (SGRT) between April 2018 and April 2019 at Boramae Medical Center in Seoul, South Korea. There are 15,000 HIV-infected individuals in South Korea, and approximately 340 patients have regular follow-up visits at the hospital, accounting for 2.3% of all HIV-infected people. Individual patient data were extracted from electronic hospital records. This study was approved by the Institutional Review Board of Seoul National University Boramae Medical Center (10-2019-36) and conducted in accordance with the tenets of the Declaration of Helsinki. All standard genotypic resistance tests were performed with written informed consent.

Table 1 . Baseline characteristics of the patients

5. Patient subgroup classification according to the degree of DRM

1. The landscape of DRMs

Among the eight ART-experienced patients, only one patient (patient #23) had SGRT results before ART. Both the pre- and post-ART DRM of the patient were PI-related minor mutations as follows: L10I and A71V in pre-ART and L10V and A71V in post-ART. As patient #23 did not take PI, the DRM change was not inferred to be ADR. Therefore, the prevalence of ADR in this study could not be evaluated. In the ART-experienced subgroup, the most common class was PI (4/8, 50.0%), followed by NNRTI and INSTI (both 1/8, 12.5%). NRTI-related mutations were absent.

Table 3 . Drug resistance mutation testing results of 8 ART-experienced patients and their antiretroviral regimens before and after SGRT

3. Correlation between the degree of drug resistance and the clinical response 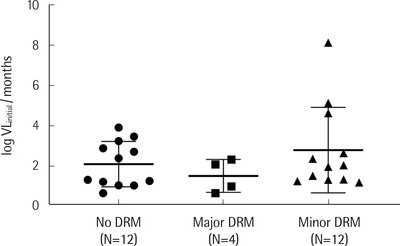 Figure 2. Log initial viral load per months required to reach virologic suppression according to DRM subtypes in 28 ART-na?ve patients. Viro-ogic suppression means the achievement of a viral load of less than the limit of detection (40 copies/mL). Horizontal lines and vertical lines indicate mean values and standard deviations, respectively. There were no differences among the three subgroups (=0.3429) or between any two groups.
Abbreviations: DRM, drug resistance mutation; VL, viral load.

Table 4 . Initial CD4 counts before ART and final CD4 counts after ART in 32 ART-naïve patients according to DRM subtypes

In the current study, we presented the landscape of DRMs in 43 Korean HIV-1–infected patients diagnosed from 2018 to 2019. Twenty of 36 (55.6%) ART-naïve patients and 4 of 8 (50.0%) ART-experienced patients carried DRMs. In both subgroups, PI DRMs were the most common mutations, followed by NNRTI and INSTI DRMs. The majority of the observed DRMs were minor mutations, and major DRMs were reported in only NNRTI-related mutations. Kim et al. showed the prevalence and profile of HIV-1 DRMs in 50 ART-naïve and 34 ART-experienced Korean individuals diagnosed between 2007 and 2011 [19]. These authors did not analyze the expression of IR gene. Six (12%) ART-naïve and 22 (64.7%) ART-experienced patients had HIV strains with resistance mutations. V179D (NNRTI) and M184V (NRTI) were the most common mutations among ART-naïve and ART-experienced patients, respectively. In comparison with Kim et al.’s results, our data showed higher TDR and PI DRM prevalence. In addition, several previous studies reported that the prevalence of TDR in South Korea ranged from 1.9% to 8.5% [10-14], which was lower than the present result. Considering only the major DRMs, the prevalence of TDR was 11.1% in this study. We speculated that the discrepancy in the prevalence of TDR may be attributed to different interpretations of DRMs among researchers, the various databases used in DRM analysis, and deviation due to small population sizes.

We could not estimate the prevalence of ADR because most of the cohort did not undergo SGRT both before and after ART. Only one patient (patient #23) underwent SGRT both before and after ART because the viral load did not decrease below the LoD on ART. The patient harbored minor PI-related DRMs (L10I and A71V) before the initiation of ART. SGRT results from both 10 and 11 months from the initiation of ART revealed only minor PI-related DRMs (L10V and A71V), and the patient was prescribed an INSTI-based regimen. The major cause of the patient’s poor response was thought to be poor compliance.

In the analysis of the correlation between DRM subtypes and the clinical response, viral loads and CD4 counts in ART-naïve patients showed no correlations with the DRM subtypes. Overall, 28 of 32 (87.5%) ART-naïve patients achieved virologic suppression and 27 (84.4%) patients had CD4 counts of 350/µL or higher after ART. An incomplete virologic response, indicative of virologic failure, is that when two consecutive plasma HIV RNA levels are ≥200 copies/mL after 24 weeks on an ART regimen in a patient without virologic suppression on the regimen [3]. As long as ART maintains viral suppression, CD4 counts would recover. CD4 count recovery occurs most rapidly in the first 3 months of ART and gradually increases thereafter [20-22]. The 7.5-month follow-ups of CD4 counts and viral loads in this study were sufficient to evaluate the clinical responses.

Most patients in the ART-naïve group showed very good responses. As most physicians in South Korea use INSTI-based regimens [23], all regimens used to treat ART-naïve patients in our study were INSTI-based, but the major DRMs were NNRTI-related mutations. The most common minor DRMs were PI-related, and the median number of mutations per patient was one. These factors explain why most patients did not develop treatment failure, irrespective of the DRM subtype.

Meanwhile, our cohort included two dead HIV-1–infected ART-naïve patients. One patient was a 42-year-old female who had no past medical history except postnasal drip syndrome. The patient had fever, chills, and cough 2 weeks before a visit, and the HIV screening test was positive. The patient was admitted and received trimethoprim-sulfamethoxazole (TMP-SMX) and methylprednisolone to treat severe pneumonia. She was then treated in the intensive care unit and died due to multiorgan failure 27 days after admission. The other patient was a 36-year-old male who presented with dyspnea a month prior. He was admitted, confirmed to have HIV infection, and treated with TMP-SMX, prednisolone, and a mechanical ventilator. The patient exhibited aggravated to acute respiratory distress syndrome, probably due to cytomegalovirus pneumonia, and finally died 27 days after admission.

We presented the recent DRM distribution and prevalence in both ART-naïve and ART-experienced HIV-1–infected patients in a single center in South Korea, although the number of ART-experienced patients was too small. A total of 58.3% ART-naïve and 50.0% ART-experienced patients harbored HIV strains with PI-related resistant mutations, which were all minor mutations. Two major DRMs in NNRTIs were observed in only four ART-naïve patients. Almost all Korean HIV-1–infected patients received INSTI-based regimens, and most patients had a good prognosis. Our results presented no major INSTI DRM, supporting the current use of INSTI-based treatment. The prevalence of TDR was higher than that previously reported, suggesting a difference in the interpretation of DRMs among researchers. In addition, there was no significant correlation between DRM subtypes and viral loads or CD4 counts. SGRT is necessary to select appropriate regimens in the initiation of ART or the treatment of treatment-failure cases and to monitor TDR. Surveillance of the distribution and prevalence of DRM in HIV-1 should be continued globally.

None. The study had no funding to declare.