Viscoelastic tests, such as thromboelastography (TEG) and throm-boelastometry, measure changes in viscoelastic properties of whole-blood clotting [1]. Since they allow rapid assessment of global hemostatic function, they have been used to guide transfusion therapy during liver transplantation and cardiac bypass surgery. In the past, the tests required non-citrated whole blood used within 5 minutes after collecting. Today, citrated whole blood can be used instead, which allows them to detect many clinical bleeding disorders in a central laboratory [2].

TEG measures different parameters of clot formation and clot lysis: reaction time (R), the time to initial fibrin formation, reflects the circulating levels of coagulation factors; time to clot formation (K); alpha angle (α), which shows the fibrinogen level; maximum amplitude (MA), reflects the combined levels of platelets and fibrinogen; percentage of fibrinolysis at 30 minutes after MA (LY30); and coagulation index (CI), a linear combination of R, K, α, and MA [3]. To evaluate blood coagulation, we need to establish reference ranges for TEG parameters and understand the factors that affect them. For instance, several studies have reported abnormal or normal TEG parameter values in patients with certain coagulation factor deficiencies [4-6]. Furthermore, demonstrating whether TEG parameters correlate with levels of coagulation and anticoagulation factors by simultaneous measuring has never been shown.

In total, 109 healthy volunteers and four patients with coagulation factor deficiencies participated in the study after approval from the Institutional Review Board of Seoul National University Hospital. All individuals were Korean. “Healthy” was defined as free from acute illness and without hospitalization for any illness during the previous 6 months. We excluded subjects with any bleeding or thrombotic disorders, recent illnesses, and those taking anticoagulants.

The mean age of the volunteers was 36 years (21–62 years). Blood samples were collected by venipuncture into commercially available tubes containing 0.109 mol/L sodium citrate (Becton Dickinson, San Jose, CA, USA). For thrombin generation assay and other coagulation tests, plasma was separated by centrifugation of whole blood at 1,550×g for 15 minutes within 2 hours after blood sampling. Plasma aliquots were stored at −80°C.

The reference ranges were determined as 90% reference intervals of data from healthy volunteers according to the Clinical and Laboratory Standards Institute (EP28-A3c)[8]. The difference between genders was evaluated using the Mann–Whitney U test. Correlations of TEG parameters with other coagulation data were expressed as Spearman’s coefficients. All analyses were conducted using SPSS version 12.0 (SPSS Inc., Chicago, IL, USA). The probability of less than 0.05 (<0.05) was considered significant.

Table 3 . Correlation of thromboelastography parameters with coagulation and anticoagulation factors 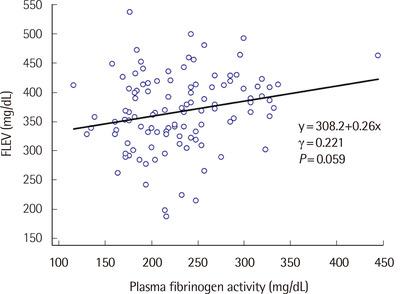 To assess whether the TEG parameters detect coagulation factor deficiencies, we performed the TEG assay in four patients with known coagulation factor deficiencies (Table 4). The patient with factor V deficiency (case 1), who showed a factor V activity of 17%, also showed abnormal R, PT, and aPTT values. Two patients with factor VII deficiency, who had a factor VII activity of 5% (case 2) and 27% (case 3), respectively, exhibited normal R values despite abnormal PT. The patient with fibrinogen deficiency (case 4), who had a fibrinogen level of 119 mg/dL, showed normal MA (43.3) and FLEV (228.1), although they were close to the lower limits of the reference ranges (MA, 42.7–73.4; FLEV, 211.2–494.5).

Table 4 . Results of thromboelastography and other coagulation tests in four patients with coagulation factor deficiencies

Our study demonstrated that R correlates with factors V and XII but not with other factors. Although we could not show associations between the factors and TEG parameters with multiple regression analysis due to the high multicollinearity, we demonstrated significant associations with simple linear correlation analysis. To confirm the correlation between the R time and the two factors, we evaluated four patients with known factor deficiencies. The patient with factor V deficiency (case 1) showed an increased R value; therefore, R is sensitive to factor V deficiency. This finding also verifies the significant correlation between R and factor V. The patients with factor VII deficiency (cases 2 and 3) did not show increased R values; thus, R is insensitive to factor VII deficiency. Consistent with this result, Tran et al. [4] reported that TEG is not suitable to detect this deficiency. The R time has also been reported as inferior to PT at identifying vitamin K–dependent coagulation factor deficiency [6].

MA represents the maximum strength of the final hemostatic clot and generally reflects fibrinogen activity, platelet count, and platelet function [9]. Our study found a significant positive correlation between fibrinogen activity and MA. Although our case 4 patient with fibrinogen deficiency had a normal MA value (43.3), it was close to the lower limit of the reference range for MA (42.7). Platelet count mainly affects MA [9]. Since the count was unavailable for our study, we cannot exclude it, and we can consider it obscured the fibrinogen effect on MA. Furthermore, MA significantly correlated with factor VIII, protein C, and plasminogen. We previously reported that measured fibrinogen activity significantly correlates with factor VIII and protein C levels in a healthy population [10, 11]. Therefore, persons with high fibrinogen levels likely also have high factor VIII and protein C levels, which may mimic the correlation between these factors and MA.

Although K and α both reflect fibrinogen activity and platelet count, we found no significant correlation between them. Thus, more studies are required to confirm whether these factors affect K and α parameters. Interestingly, factor XII significantly correlated with various parameters: R, K, α, MA, and CI. Since we used kaolin as a coagulation activator in our TEG assay, the speed and strength of hemostatic clot formation in a TEG cup were likely sensitive to the activated factor XII levels.

The relative distribution of reference ranges between male and female participants showed a similar pattern in previous reports [12-14]. As implied by the TEG parameters, women showed a more hypercoagulable profile than men, although there were no significant differences in PT and aPTT between them. Indeed, the incidence of thromboembolism is higher in women than men due to estrogen exposure [15, 16]. TEG parameters thus seem more sensitive indicators of hypercoagulability than routine coagulation tests, such as PT and aPTT.

TEG can measure FLEV with a tissue factor that activates the extrinsic pathway and platelet inhibitors, hence eliminating the platelet effect on MA [17]. In our study, FLEV moderately correlated with plasma fibrinogen activity (r=0.221), unlike in another study where the correlation was strong (r=0.933) [17]. This study assessed a population of trauma patients that showed a wide range of fibrinogen levels. In contrast, our study evaluated a population of healthy subjects that demonstrated a narrow range of fibrinogen levels within the reference range. Therefore, the population type likely accounts for the difference in fibrinogen levels between the two studies.

Our study has several potential limitations. First, and as mentioned previously, although platelet count is the main contributor to MA, we could not measure the platelet count in the healthy participants. Second, because the coagulation factor deficiencies are rare, we had only four patients to evaluate the detection ability of the TEG parameters. Third, we could not apply the strict definition of heathy adults to establish a normal reference range for TEG parameters because we tested less than 120 healthy adults needed for a reference range of nonparametric 90% reference interval. Nonetheless, since this is the only Korean study showing the reference ranges for TEG parameters in healthy Korean adults, our results can be used as a preliminary reference.

In summary, this study demonstrated that TEG parameters correlated with the levels of several coagulation factors. The R value significantly correlated with factor V and the MA value with fibrinogen. Of note, factor XII significantly correlated with R, K, α, MA, and CI. We expect that our findings will help to interpret the TEG parameters in a normal population. To further evaluate the diagnostic ability of TEG in detecting specific coagulation factor deficiencies, future studies on large cohorts are necessary.

This work was supported by the National Research Foundation of Korea (NRF) grant (2021R1A2C1006302), funded by the Korean government (MSIT).