Bleeding time (BT) has been widely used for the evaluation of primary hemostatic function since its first introduction in 1910 [1]. It involves making a small skin incision and then recording the time taken for the bleeding to stop [2, 3]. Since its introduction, BT has been modified to apply a constant pressure and use a template for the standardization of the procedure [2, 3]. It is a simple test that reflects the interactions between platelets and vessel walls. In addition, BT is a relatively inexpensive test that does not require a skilled technician or expensive equipment [3]. However, it is an invasive test, and its reproducibility and the sensitivity to mild platelet function disorders is poor [3]. In addition, many preanalytical and analytical factors can affect the BT results [1, 4]. Consequently, most guidelines recommended discontinuation of BT, and the use of BT has rapidly declined and been replaced by other less invasive ex vivo platelet function assay [2, 5-8]. However, some laboratories still use the BT tests due to the clinical field requirements [2]. In this article, the usefulness of the BT test for the evaluation of platelet function disorders and preoperative bleeding risk, and the characteristics and clinical utility of other platelet function tests that can be utilized for screening of platelet function defects will be briefly reviewed, and an efficient way to use these tests will be suggested.

In 1910, Duke described the skin BT for the first time [1]. He reported a simple skin incision technique of the earlobe, and recording the time to clot formation and bleeding stop [2, 3]. Later, it was modified to applying constant venous blood pressure (40 mmHg) to standardize venous return by Ivy et al. in 1941, along with the declaration of the forearm being the best site to test [1, 3]. Mielke et al. improved on the Ivy et al. technique by utilizing a template to standardize the length and depth of the skin incision, which was introduced in 1969 [1, 3]. In late 1990s, the Clinical and Laboratory Standards Institute (CLSI) released a guideline on the performance of BT that recommends the utilization of commercial, single-use template device for guarantee of sterility, reproducibility, safety, and convenience, however, it is currently inactivate [4].

Numerous pre-analytical and analytical variables can affect the BT results. Regarding the skin incision, the direction, number, and depth of incisions have an effect on the test results [4]. Hence, constant blood pressure should be maintained during the procedure [1, 4]. Patient factors that influence the BT results include age, gender, medication use, hematocrit level and platelet count [1, 4].

BT is insensitive to many mild platelet disorders; therefore, normal BT results do not exclude the possibility of primary hemostatic defects [3-5, 9]. Mezzano et al. [9] reported that BT results were not significantly different between the patients with bleeding disorders and healthy controls, and the sensitivity of BT for screening bleeding disorders was approximately 30% [9]. In addition, a prolonged BT alone is not a reliable diagnostic for any single platelet disorder [1]. Prolongation of BT can be found in afibrinogenemia, severe coagulation factor deficiencies, uremia, and some hematologic malignancies [4]. The positive predictive value of BT for primary hemostatic disease might be acceptable only when there is high likelihood of abnormal results, such as in patient with a personal or familial history of abnormal bleeding [4]. However, BT fails to correlate with the real bleeding tendency [3]. Therefore, BT is not suitable as a screening test of platelet function disorders and is not recommended in almost all of the current related guidelines [3-5].

BT is also not recommended for predicting perioperative bleeding [1, 10]. The routine preoperative BT test for assessing surgical bleeding risk in patients without a bleeding history has not been found to be useful [1, 4]. According to a previous study, discontinuation of the bleeding time showed no clinically significant and negative impact [11]. For example, the rate of postprocedural hemorrhage in a patient undergoing major surgery was similar before and after discontinuation of the BT [11]. The positive predictive value of BT for perioperative bleeding was only 5% [1]. In fact, the best way to determine hemorrhagic risk with surgery is adequate history taking and physical examination (Table 1) [1, 10] as it is more sensitive and specific than hemostatic testing [12]. A positive bleeding medical history is 12.5 times more likely to predict surgical bleeding risk than any laboratory test [12]. Since bleeding symptoms can be subjective in both patients’ description and physician’s examination, the use of bleeding assessment tools can standardize the severity of bleeding symptoms and can be an useful method to assess the perioperative hemorrhage [10]. The International Society of Thrombosis and Hemostasis bleeding assessment tools comprises 14 categories (epistaxis, cutaneous bruising, bleeding from minor wounds, oral cavity bleeding, gastrointestinal bleeding, hematuria, dental extractions, surgery, menorrhagia, post-partum hemorrhage, muscle hematomas, hemarthrosis, central nervous system bleeding, and other bleeding problems) for assessing the degree of bleeding symptoms [13]. Each of the categories is scored from 0-4 (except for central nervous system bleeding when the scores are 0, 3 or 4), and a final score is derived on this basis [13]. A high bleeding score is associated with the presence of an inherited bleeding disorder [13].

Currently, there are several platelet function tests that can be utilized in clinical laboratories. Light transmission aggregometry (LTA) is the most widely used platelet function test [14]. LTA uses platelet-rich plasma with various platelet agonists, such as epinephrine, adenosine diphosphate (ADP), collagen, arachinonic acid and ristocetin. It measures the change of optical density or turbidity which is induced by agonists in platelet-rich plasma [15, 16]. An impaired or abnormal platelet aggregation pattern with more than one agonist suggests platelet function defects, and the type of abnormal aggregation pattern will guide further work-up process [5, 16]. For example, an absence of aggregation to all agonists except ristocetin indicates Glanzmann thrombasthenia , absent response to ristocetin suggests Bernard–Soulier syndrome, and a markedly decreased or absent aggregation with ADP suggests P2Y12 receptor abnormality [17]. Increased platelet aggregation to low concentrations of ristocetin is compatible with platelet-type von Willebrand disease (vWD) [3, 14, 17]. LTA is considered as the gold standard for evaluating platelet function [18]. However, it requires fresh blood, in relatively large volumes (20-50 mL), it is time-consuming, and it is a technically complicated test that requires experienced laboratory personnel [9, 18, 19]. Consequently, LTA cannot be performed routinely in many laboratories. In addition, LTA results may be normal or only slightly defective in some mild platelet function defects; therefore, a normal LTA result by itself does not completely exclude a platelet function disorder [14, 16, 20].

Whole blood aggregometry (WBA) is an alternative platelet aggregation test that measures the change in electrical resistance between two electrodes immersed in a whole blood sample, due to adhesion of platelets to the electrodes and platelet aggregation [21]. Like LTA, WBA provides a detailed study of various platelet activation signaling pathways using multiple agonists with various concentrations [3, 22]. It may be more sensitive to monitor antiplatelet therapy and some platelet function defects than LTA [22]. In addition, WBA overcomes the sample volume issue of LTA, and does not require sample manipulation which can lead to potential delay of time and platelet activation during centrifugation [3, 22]. Although the above-mentioned advantage of WBA in its simplified specimen handing process and technical demands, its reproducibility, sensitivity, and specificity are yet to be established in most platelet function disorders, in addition to poor correlation with LTA and a doubtful ability to predict clinical outcomes [3, 14].

Viscoelastic tests, such as thromboelastography (TEG) or rotational thromboelastography (ROTEM) can monitor the rate and quality of clot formation using whole blood [3]. It provides various profile of clot formation and clot strength resulting from interactions between platelets and coagulation factors [3, 23]. Recently, the TEG® PlateletMapping® Assay using platelet agonists arachinonic acid and ADP has been introduced, and it can be used for monitoring of antiplatelet therapy [3]. However, it measures clot properties only; therefore, the platelet function evaluation results are neither specific nor diagnostic [3, 23].

The primary clinical utility of TEG and ROTEM tests is identifying hemostatic defects quickly in bleeding patients [24]. These have been traditionally utilized in surgical and anesthesiologic departments as point-of-care tests for determining the risk of bleeding and as a guide to hemostatic therapy and transfusion requirements [3, 24]. Although a TEG- and ROTEM-guided strategy can reduce the frequency of blood product transfusion compared to an empirical or central laboratory test-based transfusion strategy, it does not improve clinical outcomes and survival in various surgical patients [3, 24].

The platelet function analyzer, INNOVANCE PFA-100/200® system (Siemens Healthcare, Germany) has been widely used in many clinical laboratories [3]. It is a cartridge-based point-of-care assay, in which whole blood is aspirated through a small aperture (150 µm in diameter) in a membrane coated with collagen and epinephrine or ADP [3]. Under the high shear conditions, these platelet activators lead to platelet plug formation, and eventually occludes the aperture [3]. The instrument records the time until the full occlusion of the aperture as “closure time” up to a maximum of 300 seconds [3]. PFA-100/200 is simple, rapid, non-invasive, and only requires a small blood volume [3]. Characteristically, the PFA 100/200 results are highly dependent on serum von Willebrand factor levels due to the high shear conditions within the cartridge; therefore, it can be a supplement test for the detection of vWD [3, 25]. However, it should be noted that PFA-100/200 lacks a uniform high sensitivity and specificity for vWD, therefore, von Willebrand factor-specific testing should be performed if vWD is highly suspected [26, 27].

There are various preanalytical and analytical variables that can affect the closure time. Among them, perhaps the most relevant variables are low platelet count (less than 50×109/L) or hematocrit levels (less than 25%); therefore, it is not a suitable test for patients with severe thrombocytopenia and suspected platelet function disorders [3, 14, 25, 28]. In addition, some drugs, such as aspirin and non-steroidal anti-inflammatory drugs, can also affect the closure time [25]. The interpretation of PFA-100/200 closure time according to the patterns and the degree of closure time prolongation with collagen-epinephrine (C/Epi) and collagen-ADP (C/ADP) cartridge is shown in Fig. 1. 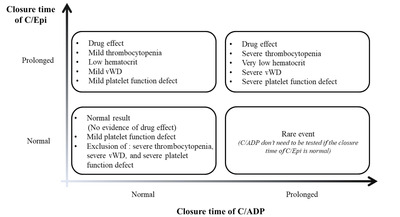 PFA-100/200 has little value for assessing surgical bleeding risk in presurgical patients without formal preoperative assessment of medication, personal, and family history [12, 25]. However, the utility of closure times depend on the patient population under investigation [25]. For example, if a patient has a bleeding history, PFA-100/200 is held as worthwhile in screening whether the abnormal bleeding is associated with platelet dysfunction [12].

BT is one of the oldest hemostasis tests which is still being used in hospital laboratories. Although it has some advantages, its sensitivity and specificity for detecting platelet function abnormalities are low and the reproducibility is poor. Therefore, BT is not a suitable screening test for platelet function defects and a predictive test for surgical bleeding, and it is better to be retired. Nevertheless, when necessary, the BT test should be performed only in select patient populations who have high likelihoods of an abnormal result. In addition, the test should be carried out according to the standardized procedure. Finally, the results interpretation should include the BT limitations. Unfortunately, there is no single platelet function test that can completely replace BT yet. Among them, PFA-100/200 can be a practical and readily available platelet function screening test. However, it has unsatisfactory diagnostic sensitivity and specificity for identifying platelet function defects and assessing preoperative bleeding risk. Therefore, PFA-100/200 should be used with selectively sorted patients who have positive personal or family bleeding history, with consideration of medication, platelet count, and hematocrit level.

Go to
None declared.

This study was supported by the Soonchunhyang University Research Fund.