Organisms of the genus are common components of the microbiomes of environments such as soil, brines, and biofilters [1, 2]. was formerly categorized as belonging to CDC Group EO-2, which includes aerobic bacteria, with forms ranging from coccoid to short, thick rods, often appearing vacuolated or peripherally stained (O-shaped) [1]. The species is unique within the genus because it is associated with human infection [3].

Although is rare opportunistic human pathogen, it is capable of causing various human infections including bacteremia [4], keratitis [5], otitis [1], and myocarditis in transplanted hearts [6]. has a peculiar characteristic in that it can grow using propylene glycol, a common ingredient in cosmetics, as its sole source of carbon and energy [7].

Here, we describe a case of peritoneal dialysis-related peritonitis caused by , which was successfully treated with cefazolin and gentamicin without catheter removal. We investigated several putative virulence determinants and concluded that, to our knowledge, this is the primary peritonitis-causing isolate in Korea.

A 39-year-old male with end-stage renal failure due to focal segmental glomerulosclerosis had been on continuous ambulatory peritoneal dialysis since 2012. He was seen at the PD peritoneal dialysis unit on March 21, 2021 reporting cloudy peritoneal fluid in the absence of fever or abdominal pain. Microscopic examination of the peritoneal fluid showed 1,750/μL of white blood cells (WBCs), with 46% of those being neutrophils. Other laboratory tests such as complete blood cell count or C-reactive protein (CRP) were not performed.

A peritoneal fluid sample of approximately 5 mL was inoculated in a BACTEC Plus Aerobic/F and Plus Anaerobic/F broth (Becton Dickinson, Meylan, France) and incubated at 37°C in a BACTEC blood culture system (Becton Dickinson). Bacterial growth was detected in the aerobic bottle after 30 hours of incubation. This was subsequently subcultured onto blood, McConkey, and chocolate agar. After 48 hours of incubation, shiny, brownish white colonies were observed on the blood and chocolate agars (Fig. 1A and 1B). Gram staining of these colonies showed the presence of gram-negative diplococci with a central halo shaped like a doughnut (Fig. 2). This strain ( CUK22150) was identified as with 99.9% confidence using VITEK-MS (BioMérieux, Marcy-l’Etoile, France) and VITEK 2 GN card (BioMérieux, Marcy l’Etoile, France). For confirmation, sequencing of the 16S ribosomal RNA gene was performed using a universal primer pair: 27F (5′-AGAGTTTGATCC TGGCTCAG-3′) and 1492R (5′-GGTTACCTTGTTACGA CTT-3′) [8]. When compared to sequences found in the NCBI database using the BLAST search engine, the sequence showed 100% identity (1329 of 1329 bases) to NR_029038.1. An antimicrobial susceptibility test was performed using the disk diffusion method on Muller-Hinton agar. As no interpretative criteria exist for the antimicrobial susceptibility testing of , we adopted the CLSI M100-ED31 criteria for the disk diffusion breakpoint [9]. Our sample was susceptible to piperacillin/tazobactam, amikacin, cefoxitin, ceftazidime, ceftriaxone, amoxicillin/clavulanate, cefepime, meropenem, imipenem, and ertapenem. 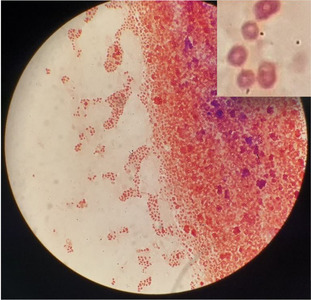 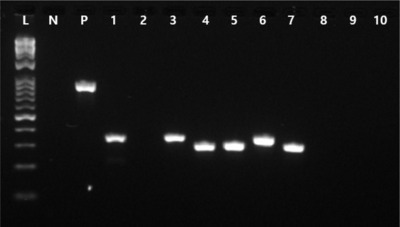 The genus consists of over 50 species which share common features such as nonmotility and oxidase positivity [1]. , however, is unique because of its capability to infect humans. Lasek et al. [3] investigated the genome composition of to gain insight into its mechanisms of pathogenicity and reported 25 putative virulence determinants in the CCUG 32053 strain (Sweden). There They were compared with the genomes of two other strains; TT13 from the forehead skin of a college student from Korea [7] and FDAARGOS 252 isolated from urine suprapubic aspirates in the USA (GenBank accession number CP020442.2). Among the 25 putative virulence determinants, six were located on chromosomes and the remaining 19 were located on two extrachromosomal replicons (pYEE2 and pYEE5). Interestingly, while several genes located in chromosomal genomic islands ( 2) were not detected in any of the three strains, the 7 genes located in pYEE2 were detected in all three strains [3]. In addition, the distribution of the 25 putative virulence determinants reported differed between strains.

In this study, we used PCR to identify the presence of virulence genes as analysis of the virulence gene profile is important for infection prognosis and understanding the epidemiological prevalence. We investigated the presence of each of the five determinants in the chromosome and extrachromosomal replicons by PCR and sequencing. The , , , , , and genes were found to be amplified. This suggests that the strain of used in this study contains several virulence genes related to resistance to oxidative stress, formation of biofilm, and adjustment to pH conditions. In addition, CUK 22150 showed the highest concordance with TT13 (9 determinants), followed by CGUG 32053 (6 determinants) and FDA-ARGOS_252 (3 determinants), respectively (Table 1) [3, 7, 12].

CUK 22150 was susceptible to piperacillin/tazobactam, amikacin, cefoxitin, ceftazidime, ceftriaxone, amoxicillin/clavulanate, cefepime, meropenem, imipenem, and ertapenem. This is in line with a study by Arias et al. [13] who found that was susceptible to gentamicin, amikacin, piperacillin/tazobactam, imipenem, and meropenem, although the broth microdilution method and EUCAST breakpoints for and spp. were used. Wallet et al. [2] also reported similar antimicrobial susceptibility test results and recommended the intraperitoneal administration of antibiotics for a more concentrated dose leading to higher concentrations at the infected site [2].

We reviewed 5 other cases of peritoneal dialysis-related peritonitis caused by (Table 2) and found some common features between among the 6 patients; symptoms were usually mild with an absence of fever and little or no abdominal pain, and treatment outcomes were satisfactory even without dialysis catheter removal [2, 13-16].

Cases like this can often be misinterpreted as caused by coagulase-negative staphylococcus (CoNS), which is the most common cause of peritoneal dialysis-related peritonitis. Misdiagnosis of a infection as one caused by CoNS is critical because the treatment of CoNS peritonitis is intraperitoneal cephalosporins or vancomycin for 2 weeks, which is ineffective for that of a infection, which should be treated with effective antibiotics for 3 weeks [11]. The introduction of new technologies such as MALDI-TOF MS and 16s rRNA sequencing has made it possible to identify peritonitis-causing pathogens rapidly and accurately.

The 2016 ISPD peritonitis recommendations [11] state that for empiric antibiotic selection, gram-negative organisms should be covered by third-generation cephalosporin or an aminoglycoside. However, after identification of the organisms, while peritonitis should be treated with 2 antibiotics with different mechanisms of action, non- gram-negative peritonitis can be treated with other effective antibiotics. Therefore, rapid and accurate identification of causative organisms and subsequent antimicrobial susceptibility are important for proper antibiotic selection and treatment. We present the first case of -caused peritoneal dialysis-related peritonitis in Korea, which was successfully managed with the administration of intraperitoneal gentamicin and cefazolin.