Recent Seroprevalence of Anti-hepatitis A IgG in the Korean Population: a Large, Population-based Study

Hepatitis A infection caused by the hepatitis A virus (HAV) is a global health concern, with an estimated 1.5 million people infected annually [1]. Although HAV infection is usually a self-limited illness that does not become chronic, fulminant hepatitis may develop, for which liver transplantation may also be required [1, 2]. Globally, acute HAV caused 52,000 deaths in 1980–2016 [2]. The population incidence of HAV infection is related to socioeconomic factors including housing density, sanitation, water quality, and income [1, 3]. HAV infection confers lifelong immunity and is preventable via vaccination; the so-called ‘‘paradox of hepatitis A risk” refers to the fact that a high seroprevalence of anti-HAV IgG antibodies reflects high endemicity, meaning high levels of population immunity [1].

In recent years, HAV seropositivity among young adults in South Korea has decreased owing to improved general hygiene and economic status [3]. The HAV seropositivity was above 80% in teenagers during the 1970s in South Korea but had decreased to less than 20% in 2007, highlighting a rapid decline in immunity against HAV [3, 4]. In South Korea, the HAV vaccine was rst introduced in 1997 and has been recommended for high-risk groups; it is currently recommended for children over 12 months of age [5]. Although HAV vaccination was introduced in South Korea more than 20 years ago, the reported infection incident rates in 2017 were 8-9 patients per 100,000 population [3, 6]. Because there is little information about the more recent seroprevalence of anti-HAV IgG in South Korea [3, 6], this study retrospectively analyzed seroprevalence from 2015 to 2017.

Anti-HAV IgG Seroprevalence data from January 2015 to December 2017 were obtained from the laboratory information system of Green Cross Laboratories, one of the largest referral laboratories in South Korea that provides clinical sample analysis services to 1,348 hospitals and local clinics nationwide. We analyzed the seroprevalence data of all adults (>18 years) who visited hospitals or local clinics and underwent serum anti-HAV IgG tests by Green Cross Laboratories during the study period. Duplicated test results were excluded. The subjects were categorized into age groups by decade and all data were anonymized before analysis. This study was conducted according to the principles of the Declaration of Helsinki and all procedures involving human subjects were approved by the Institutional Review Board of Green Cross Laboratories (GCL-2018-1010-01). This study involved no more than minimal risk to the subjects and the Institutional Review Board of Green Cross Laboratories waived informed consent for the retrospective data collection and review.

Serum anti-HAV IgG tests were performed by chemiluminescence microparticle immunoassay (CMIA; Abbott, USA) on an Architect i2000 analyzer (Abbott, Singapore) according to the manufacturer’s instructions. The resulting chemiluminescent reactions were measured as relative light units (RLU). CMIA test positivity was de ned as a serum anti-HAV IgG level ≥1.00 S/CO (sample RLU/cut-off RLU). Positive anti-HAV IgG tests were considered ‘immune’ to HAV (representing either past HAV infection or vaccination) [1].

Statistical analysis was performed using MedCalc software for Windows, version 17.9.7 (MedCalc Software, Ostend, Belgium) and OpenEpi software, version 3.01 (www.openepi.com). Seroprevalence and disease burden were compared among age groups, sexes, and geographical regions. To compare the seroprevalence of anti-HAV IgG among geographic regions by population density in 2015 based on data from the KOrean Statistical Information Service (KOSIS) [7], Seoul, Gyeonggi province, Incheon, Daejeon, Ulsan, Daegu, Busan, and Gwangju were categorized as density group 1 (population density over 1,000 persons/km2); the other regions were categorized as density group 2 (population density <1,000 persons/km2). Geographic regions were also categorized into three groups based on their populations in 2015 [7] as follows: group 1, >10% of the total Korean population (Seoul and Gyeonggi province); group 2, 5–10% of the total Korean population (Incheon, North and South Gyeongsang provinces, and Busan); and group 3, <5% of the total Korean population (the other regions). Differences in seroprevalence between categorical variables were analyzed by Chi-square tests, while continuous variables were compared by analysis of variance (ANOVA). Multivariable-adjusted logistic regression analysis was performed to evaluate variables associated with HAV immunity (anti-HAV IgG-positive). P-values <0.05 were considered statistically significant.

Table 3 . Hepatitis A seroprevalence among geographic regions in Korea 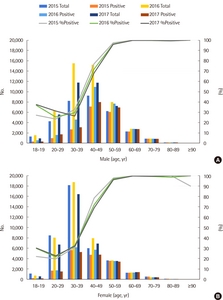 This study evaluated the annual anti-HAV IgG seroprevalence in the Korean adult population between 2015 and 2017. The strength of this study is its large, nationwide population. Thus, investigating the current seroprevalence of anti-HAV IgG and the disease burden of hepatitis A will aid in efforts for infection prevention and control [3].

Serological surveillance is an important tool for the evaluation of vaccination programs and avoids the limitations of passive disease reporting systems [14]. Because this study provides basic information on the seroprevalence of anti-HAV IgG in the Korean population, it contributes to identifying groups at high risk for an HAV epidemic in Korea. Speci cally, Koreans in their 20s, 30s, and 40s are at increased risk for hepatitis A and should be identi ed and vaccinated [3, 5]. Despite the availability of the HAV vaccine in South Korea since 1997, vaccination of children only started in 2015 and the rate of catch-up vaccinations for young adults remains low due to high cost and low levels of knowledge and awareness [3]. An immunity gap in young adults and an epidemiologic transition cannot be ignored when formulating public health policies [15]. Therefore, a hepatitis A immunization program to promote catch-up vaccinations for young adults and an active public campaign regarding young adult vaccination are needed in South Korea [3].

More than half of the positive results in this study were from Gyeonggi province, which includes the capital area of South Korea and about 23.7% of the total Korean population [7]. In early 2007, the South Korean government created a special administrative district— ‘Sejong city’—from parts of the South Chungcheong and North Chungcheong provinces, near Daejeon, to relocate nine ministries and four national agencies from Seoul. The median age of the subjects differed signi cantly among geographic regions in this study. This might have affected the seroprevalences in different regions. In this study, fewer than 1,000 subjects were tested for anti-HAV IgG in the Ulsan and South Jeolla provinces, which could have affected the observed anti-HAV IgG seropositivity. Additional studies are needed to determine the effects of regional differences in various factors including health awareness and government programs for encouraging public health on anti-HAV IgG seropositivity.

One limitation of this study was the lack of clinical information, including detailed history, physical examination, other laboratory and image studies associated with HAV infection, and disease severity, which were substantially omitted from the seroprevalence reports. As a result, preliminary diagnoses or misdiagnoses may obfuscate the true incidence of hepatitis A in South Korea. Nevertheless, anti-HAV IgG is a well-known marker of the epidemiologic status of population immunity and this study provides valuable information despite the lack of clinical information [1, 3, 5, 15]. Additionally, fewer than 1,000 subjects aged over 80 years and subjects living in some geographic regions had been tested for anti-HAV IgG. This may have affected the observed seropositivity. Finally, the present study evaluated anti-HAV IgG seropositivity from Korean hospitals and local clinics; thus, the ndings may not be generalizable to other populations such as patients visiting tertiary hospitals.

In conclusion, hepatitis A seroprevalence has been relatively low in the Korean adult population in recent years. Young adults (10s-30s) are especially at risk for an HAV epidemic and should be identi ed and vaccinated. This study provides valuable information for establishing a catch-up vaccination program in South Korea; however, additional studies on long-term changes in seroprevalence in patient populations are needed.

Thanks to Ms. Son and Mr. Kim at Green Cross Laboratories for their administrative support.