Korea has the highest incidence rate of gastric cancer (GC) in females and the second-highest incidence rate in males worldwide [1]. Furthermore, GC is the second most common cancer in Korea [2]. Since recurrence of GC is the major cause of GC-related deaths, efforts have been made to identify the patterns of recurrence and establish appropriate therapeutic strategies [3]. A recurrence after more than 10 years is rare, and the most common site for GC recurrence is the peritoneum [4, 5]. We present the case of a 56-year-old man who was diagnosed with metastasis of gastric signet ring cell carcinoma (SRCC) to only the bone and bone marrow, with a 12-year disease-free interval (DFI) after local recurrence in 2006, which was 14 years after the first diagnosis in 1992.

In December 1992, a 30-year-old man visited our hospital with complaints of epigastric pain. Gastrofibroscopy (GFS) and biopsy of an ulcer at the angle of the lesser curvature were performed. The findings revealed the presence of adenocarcinoma with poorly differentiated, signet ring cells. He underwent subtotal gastrectomy with Billroth II gastrojejunostomy. Tumor node metastasis (TNM) classification, according to the 4th edition of the American Joint Committee on Cancer (AJCC) staging system [6], was stage II (T1N2M0). After the surgery, he was treated with a total dose of 100 mg of intravenous (IV) mitomycin C over 10 cycles. His follow-up surveillance, which included GFS and tumor markers such as carcinoembryonic antigen (CEA) and carbohydrate antigen 19-9 (CA19-9), showed no evidence of recurrence until 1996. In 2005, he revisited our hospital due to epigastric pain. GFS, computed tomography (CT), and laboratory tests were conducted and showed no evidence of recurrence at that time. In 2006, he underwent a follow-up GFS and biopsy in the stomal area, which revealed SRCC. Total gastrectomy with Roux-en-Y anastomosis was then performed. A second TNM classification of his tumor, according to the 5th edition of the AJCC staging system [7], was stage IA (T1N0M0). No other treatment was provided after surgery, and annual follow-up examinations revealed no evidence of recurrence until 2015.

In 2018, the patient, now 56 years old, visited our hospital with a complaint of back pain. He underwent magnetic resonance imaging and CT. The findings suggested multiple myeloma or metastasis to multiple sites. He was hospitalized, and a complete blood count revealed a hemoglobin level of 9.6 g/dL, a white blood cell count of 3×109/L, and a platelet count of 273×109/L. Red blood cell count, hematocrit, mean corpuscular volume, mean corpuscular hemoglobin, and mean corpuscular hemoglobin concentration were 4.05×106/μL, 31%, 76.5 fL, 23.7 pg, and 31 g/dL, respectively. Laboratory findings were suggestive of iron-deficiency anemia and pernicious anemia due to decreased levels of serum iron, at 36 μg/dL (normal range, 70–190 μg/dL), ferritin, at 6.86 ng/mL (normal range, 29–278 ng/mL), and vitamin B12, at 64.68 pg/mL (normal range, 160–970 pg/mL), and increased levels of total iron-binding capacity of 495 μg/dL (normal range, 260–400 μg/dL). The results of the biochemistry tests were within the normal range, except for a decreased serum calcium level of 7.9 mg/dL (normal range, 8.6–10.6 mg/dL) and an increased alkaline phosphatase (ALP) level of 435 IU/L (normal range, 30–120 IU/L). Hypocalcemia and an elevated ALP level are likely to be associated with increased osteoblastic activity. The levels of CEA and CA19-9 tumor markers were normal. GFS, which was performed again, showed non-specific findings, and chest and abdominal CT scans revealed no lesion except diffuse osteosclerotic lesions of the bony thorax. Bone scan showed hotspots indicating tracer uptake in the ribs, sternum, pelvic bones, and multiple vertebrae (Fig. 1). Bone and bone marrow biopsies and bone marrow aspiration were performed. Bone marrow aspirate smears showed normocellular marrow with abnormal cells that were occasionally seen alone or in clusters (Fig. 2). They were large-sized cells with eccentrically placed nuclei and abundant cytoplasm. Bone marrow biopsy stained with hematoxylin and eosin (HE) revealed metastatic signet ring cell carcinoma in the normal marrow space (Fig. 3). Immunohistochemical (IHC) staining of the bone marrow biopsy was positive for pan-cytokeratin antibody and cytokeratin 7 antibody (CK7) but negative for cytokeratin 20 antibody (CK20). Based on the results of the bone marrow biopsy and the patient’s clinical history, signet ring carcinoma was strongly believed to have originated from the GC. 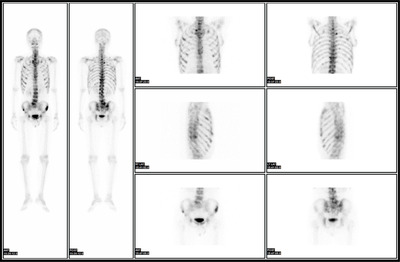 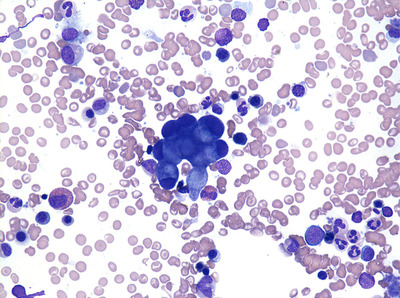 Chemotherapy was initiated. During cycles 1-9, the patient had been prescribed IV cisplatin (80 mg/m2) on day 1 and oral capeci-tabine (1,000 mg/m2) on days 1-14. Unfortunately, a 6-month follow-up positron emission tomography-CT (PET-CT) scan conducted in November 2018 showed increased fluorodeoxyglucose uptake in the sacral area, and disease progression was suspected. The patient’s regimen was then changed to IV paclitaxel (80 mg/m2) on days 1, 8, and 15 with IV ramucirumab (8 mg/kg) administered on days 1 and 15. After 12 cycles of the second regimen, progressive metabolic disease was observed on a PET-CT scan performed in November 2019. The regimen was changed to IV irinotecan (125 mg/m2) on days 1 and 8. In March 2020, PET-CT, which was performed after the 6th cycle of the third regimen, exhibited new multiple hypermetabolic lesions in the ribs, vertebral bodies, and the right iliac bone. The regimen was changed to FOL-FOX; unfortunately, the patient died of pneumonia in June 2020, 26 months after the second recurrence (Fig. 4). 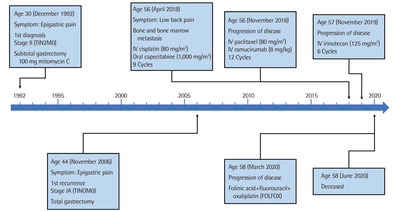 Figure 4. Timeline of the patient’s diagnosis and treatment regimens.

It is difficult to predict metastasis to the bone and bone marrow in patients with GC with a DFI of more than 10 years. Ahn et al. [11] reported that most patients with bone metastases had symptoms related to bone pain (88%) and elevated serum ALP levels (average, 484.4±785.6 U/L). According to Kim et al. [14], most patients with bone marrow metastases had bone involvement (79.5%) and underwent bone marrow biopsy due to thrombocytopenia (69.2%) and disseminated intravascular coagulopathy (20.6%). Common symptoms included bone pain (43.6%), active bleeding (20.6%), dyspnea (12.8%), elevated serum ALP (average 573 IU/L), and elevated serum lactate dehydrogenase (average 1,531 IU/L). The patient in this study had back pain, a non-specific symptom, and elevated ALP levels. These findings might have clinical importance. Non-specific symptoms such as back pain during the follow-up of patients with GC might be indicative of metastasis to the bone and bone marrow. This should prompt clinicians to conduct confirmatory tests.

There are two novel aspects of our study: first, metastasis to the bone and bone marrow in a patient with GC who had a DFI of more than 10 years is rare; second, the patient survived for approximately 26 months (779 days) after the diagnosis of bone marrow metastases. In the 39 cases reported by Kim et al. [14], the median survival time of all patients was 44 days (range, 2–252 days). In the report published by Kwon et al. [18], the median survival time of all patients was 37 days (range, 12.5–61.5 days). The median survival time of eight patients in the study by Ergun et al. [19] was 72 days (range, 3–145 days). The authors of the aforementioned studies analyzed several adverse prognostic factors such as supportive care without chemotherapy, low serum sodium level (<133 mmol/L), presence of lung metastasis, presence of peritoneal seeding, and elevated alanine aminotransferase level (ALT, >31 IU/L). In this case, the patient had no adverse prognostic factors, and serum sodium levels (139 mEq/L) and ALT levels (16 IU/L) were both within the normal range (normal serum sodium range, 135–145 mEq/L; normal ALT range, 0–40 IU/L). Palliative chemotherapy might have influenced the duration of survival in this patient. However, chemotherapy regimens for bone and bone marrow metastasis in GC have not been adequately optimized due to a lack of prospective studies. Further analysis is necessary to establish a therapeutic strategy for bone marrow metastasis of GC.