Iso-oncotic human serum albumin (HSA) is the primary replacement fluid of choice during therapeutic plasma exchange (TPE). Hypersensitivity reactions to HSA are rare, but require proper evaluation and management. In this article, we report two cases of hypersensitivity reactions to 5% HSA during TPE and discuss strategies to address this problem. The first case was a 60-year-old female patient, who was scheduled for TPE for treatment of recurrent focal segmental glomerulosclerosis after ABO-incompatible kidney transplantation. She developed a pruritic rash on her entire body during the first two sessions of TPE using 5% HSA. The third session was conducted using 500 mL normal saline, 1,000 mL 10% pentastarch, and 750 mL 5% HSA, where she eventually developed a pruritic rash when HSA was infused. There were no adverse events during the fourth and fifth session when fresh frozen plasma was used in place of HSA. The second case was a 50-year-old male patient diagnosed with optic neuritis, who was admitted for five sessions of TPE. The patient developed a pruritic rash on his entire body during the first session of TPE using 5% HSA. The patient experienced no adverse events during the following four sessions using fresh frozen plasma. Certain elements contained in HSA, such as albumin aggregates, prekallikrein activator, and caprylate-modified albumin, might be the reason for these hypersensitivity reactions. Careful selection of alternative replacement fluids is important to avoid premature termination of TPE procedures and secure optimal treatment options for patients.

During therapeutic plasma exchange (TPE), it is necessary to provide an adequate colloid-containing solution to replace removed plasma. Although it may lead to a transient decline in the levels of many plasma components, iso-oncotic 4–5% human serum albumin (HSA) in normal saline is the primary replacement fluid of choice for TPE. Fresh frozen plasma (FFP) is reserved for use in patients with thrombotic thrombocytopenic purpura and other indications where replenishing normal plasma proteins, such as coagulation factors, is considered essential [1]. Allergic reactions due to antibody-mediated hypersensitivity are the most common adverse events associated with FFP transfusion. Plasma proteins, such as haptoglobin, immunoglobulin A (IgA), and C4, are responsible for anaphylactic reactions in patients with deficiencies; however, the offending plasma protein is not easily identifiable in most instances [2, 3]. Hypersensitivity reactions to HSA, albeit very rare, have been previously published [4-8], but there are limited data on these reactions in the Korean population [9]. Herein, we report two cases of hypersensitivity reactions to 5% HSA during TPE and briefly discuss possible strategies to address this problem in the TPE setting.

A 60-year-old female patient was admitted to a tertiary hospital in Seoul and scheduled for TPE for treatment of biopsy-confirmed recurrent focal segmental glomerulosclerosis. The patient’s vital signs on admission were a blood pressure of 131/77 mmHg, heart rate of 91 beats/min, respiratory rate of 18 breaths/min, and body temperature of 37.0°C. The patient underwent ABO-incompatible kidney transplantation at the same hospital 4 years previously and 16 TPE procedures were conducted during the pre- and post-transplant periods without the occurrence of any adverse events, including hypersensitivity reactions, from use of 5% HSA (Human Serum Albumin Injection 5%, Greencross, Yongin, Korea) and FFP as the replacement fluid in nine and seven TPE procedures, respectively. The composition of the HSA solution used is shown in Table 1. The amount of each component per unit was not disclosed.

The next two sessions of TPE were performed with FFP on the eighth and tenth days of admission. Premedication with 4 mg chlorpheniramine was provided and the TPEs were completed without any adverse events. The apheresis machines used for the TPEs were a COBE Spectra (Terumo BCT, Lakewood, CO, USA) and Plasauto EZ (Asahi Kasei Medical, Tokyo, Japan).

Table 2 . Clinical features of the TPE procedures performed in the two patients

Albumin contributes 70–80% of the oncotic pressure of normal plasma, which averages 4.2 g/dL [1]. Twenty-three different allotypes of albumin have been reported for human sera [8]. HSA is purified from large pools of donated human plasma using variations in the Cohn fractionation technique. Purified albumin is heated to 60°C for 10 hr, which effectively pasteurizes the product and inactivates viruses. Additional steps in the fractionation process are taken to inactivate or remove heat-stable viruses, such as the hepatitis A virus and parvovirus [10]. In addition to reduced risk of viral transmission, other adverse events, including hypersensitivity reactions, occur less frequently with HSA than FFP [1]. Generally, hypersensitivity reactions resolve spontaneously when infusion of the problematic solution has been stopped and the patient has responded well to treatment or premedication with antihistamines and/or corticosteroids. In rare cases, however, severe or potentially life-threatening reactions requiring prompt recognition and immediate management occur [11]. In the two patients discussed in this study, the hypersensitivity reactions were generally mild to moderate, involving only cutaneous manifestations, such as erythematous rash and pruritus. Although potentially life-threatening symptoms involving the respiratory and/or cardiovascular systems observed in anaphylactic reactions, such as airway compromise and severe hypotension requiring vasopressor treatment, were not present in our patients, mucocutaneous symptoms that do not respond to medication can imbue the patient with great discomfort and suffering, especially if these symptoms involve the entire body, and lead to premature termination of TPE. To sustain an adequate number of TPEs necessary for the patient, it is important to identify the cause of associated adverse reactions regardless of severity and select appropriate alternative replacement fluids.

The TPEs performed on our two patients were based on centrifugation (cTPE) and membrane filtration (mTPE), which are both well-established procedures. Although cTPE has a higher plasma removal efficiency during a shorter treatment duration, the declines in markers of procedural efficacy are comparable [17]. Hence, our institution has no preference between cTPE and mTPE beyond taking into consideration whether patients have problems using heparin as the anticoagulant. Activation of the complement cascade has been observed in mTPE, but not cTPE [18]. However, hypersensitivity reactions also occurred during cTPE using the COBE Spectra in Patient 1. It is more likely that the possible culprit of hypersensitivity reactions in our cases was a certain element contained in HSA rather than membrane filtration.

When hypersensitivity reactions to HSA do not respond to symptomatic treatment, infusion of HSA must be stopped [3]. During laboratory examinations, contaminating plasma proteins other than albumin need to be considered first as causative agents. Plasma levels of IgA, C4, and haptoglobin and their corresponding IgG and IgE antibodies should be evaluated [9]. Furthermore, skin prick, intradermal, and specific IgE tests can be performed against aggregated or chemically modified HSA [5]. Unfortunately, the results of these tests were unavailable for our two patients. In these patients, alternative replacement fluids, including crystalloid, synthetic colloid, and FFP, were infused without incurring any adverse reactions during TPE. We presumed certain factors inherent in HSA, such as albumin aggregates, PKA, or caprylate-modified albumin, may have contributed to the hypersensitivity reactions in our two patients. All HSA solutions used in the two patients were produced by the same manufacturer, but their lot numbers were not recorded. Therefore, the effect of lot-to-lot variability on these hypersensitivity reactions could not be evaluated.

When HSA is suspected as the culprit of hypersensitivity reactions during TPE, there is no standardized protocol for selection of alternative replacement fluids. Regarding HSA production, manufacturer-to-manufacturer and lot-to-lot variability exist in terms of albumin aggregate content, plasma protein contamination, and types of stabilizers and albumin variants. Therefore, replacement with HSA from different manufacturers or different lots from the same manufacturer could be a first option. If the replacement HSA continues to produce hypersensitivity reactions, crystalloid solutions can be used as alternative replacement fluids because they lack allergic potential. However, crystalloids have less of a volume-sparing effect and more potential to induce clinically significant interstitial edema compared to HSA [19]. As for synthetic colloids, hydroxyethyl starches (e.g., pentastarch) are frequently used, while dextrans and gelatins are less commonly used [19]. Although synthetic colloids are relatively inexpensive, they are associated with a higher increased risk of adverse reactions than HSA, possibly due to their non-human origin [20]. FFP is also an alternative choice to HSA, particularly when albumin aggregates or caprylate-modified albumin are considered causative agents of the hypersensitivity reaction. When dilutional coagulopathy due to the infusion of choice. However, we should always keep in mind that the use of FFP as a replacement fluid is associated with increased risk of viral transmission, hypersensitivity reactions, and citrate toxicity compared with crystalloids and synthetic colloids [1]. Replacement with crystalloids alone carries the risk of peripheral edema [21] and therefore should be restricted to small-volume plasma exchange. Combining crystalloids with synthetic colloids and/or FFP would be a better alternative in a typical clinical setting. Synthetic colloids or FFP alone can also be used as an alternative to circumvent the hypersensitivity reactions associated with HSA, particularly when the risk of peripheral edema is high and the adverse effects of synthetic colloids or FFP are relatively tolerable. The replacement fluid selection is made on an individual case-by-case basis, where the patient’s entire clinical picture is taken into account. The proposed algorithm described above for replacement fluid selection is shown in Fig. 1. 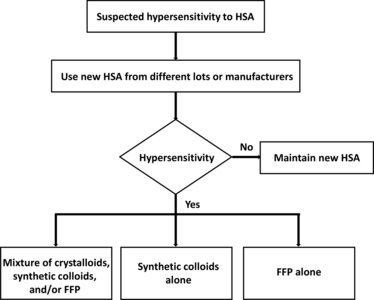 If the use of HSA is unavoidable, treatment with a stepwise desensitization protocol can also be considered as a reasonable option [9]. Although desensitization has medium- to long-term benefits, this strategy may not be feasible in short-term TPE situations. Depletion of stabilizers from HSA through adsorbents or dialysis before infusion also helps prevent hypersensitivity reactions to stabilizer-modified HSA [22]. However, these methods are technically demanding and their use in routine clinical practices is currently questionable.